President Donald Trump’s campaign is selling fine-point markers as the president attempts to raise money after CNN criticized him for supposedly using a Sharpie on a map to alter Hurricane Dorian’s trajectory.

“Buy the official Trump marker, which is different than every other marker on the market, because this one has the special ability to drive @CNN and the rest of the fake news crazy!” Campaign Manager Brad Parscale wrote in a tweet Friday. He included a link to the campaign website explaining how to buy one of the markers. 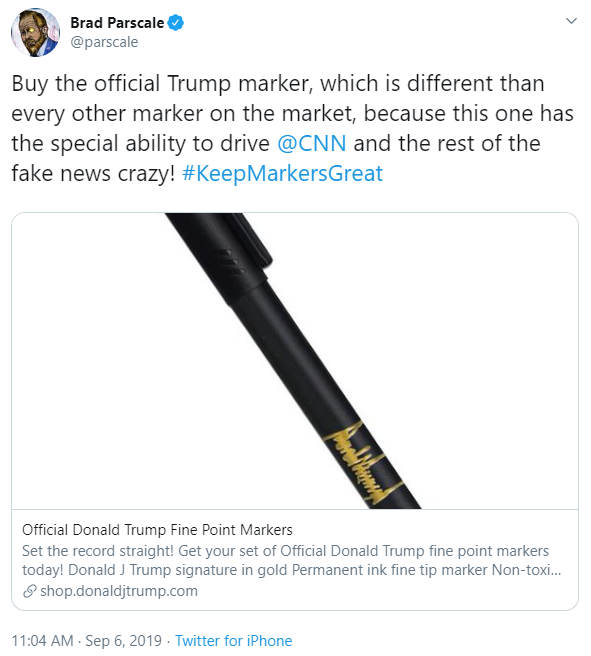 Trump tweeted a warning Sunday that Dorian, which flattened parts of the Bahamas, might hit Alabama. The president doubled down and tripled down after many in the media tried to correct, showing a map of the path of the hurricane that had been altered with a sharpie in the Oval Office.

Analysts believe the Trump’s tiff with CNN and other media is obscuring more important matters, namely where Dorian is headed next. Ryan Maue, a meteorologist and climate analyst, for instance, dinged the media for focusing like a laser beam on Trump’s claims.

Maue said in a series of tweets Thursday that Dorian was forecast to blow into the Gulf of Mexico on its way to Alabama until it abruptly shifted course and skipped across the East Coast. He chastised Trump for relying on an old forecast while tweeting about Alabama but also dinged media pundits for suggesting the state was never in danger.