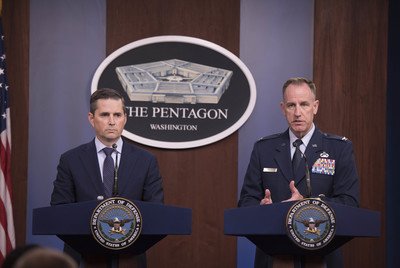 All indications to this point are that Iran is in some way responsible for the Sept. 14 attack on oil facilities in Saudi Arabia, a senior Defense Department official said.

At a Pentagon news conference today, Jonathan Rath Hoffman, assistant to the secretary of defense for public affairs, said the attack on two civilian facilities has had a dramatic impact on global markets.

Our goal has been to deter conflict in the Middle East, [and] we’ve said that repeatedly.”

Regardless of whether the attack involved a proxy or was a direct attack, Hoffman said, it represents a dramatic escalation that was well-planned and sophisticated. “We need to get the parties back on the diplomatic path and [past] this type of action,” he added.

Air Force Col. Patrick Ryder, special assistant for public affairs to the chairman of the Joint Chiefs of Staff, noted that Pentagon reporters have seen the same photos that Defense Department officials have seen. “You look at the precision,” he said. “I think that is not something we’ve seen in the past.”

Though he had no announcements on increasing troop strength in the region, Ryder said, “we certainly believe that we have the forces in the region that we need to protect our forces and to deter potential future threats.”

Hoffman said the U.S. position has been that Saudi Arabia will assess what took place. the Saudis make the declarations on where they believe the attacks came from and the ultimate responsibility,” he said.

U.S. Central Command is in consultation with the Saudis to discuss potential ways to look at mitigating future attacks, Ryder said.

“And to that point, I would highlight the fact that the Saudis have had some effect … in terms of countering missile and drone strikes in the south, where the attacks have been  relatively more common,” Ryder said.

A Centcom forensics team is still in the area of the attack in Saudi Arabia, working with the Saudis in their investigation, Ryder told reporters.

“Our goal has been to deter conflict in the Middle East, [and] we’ve said that repeatedly,” Hoffman said. “The president has said that, the secretary has said that. We do not want conflict. What we do want is … for Iran to return to the international rules-based order and to cease the malign activity they have been promoting in the region and to get back on the diplomatic path.”