Axelrod, who served as a chief strategist for Obama’s presidential campaigns, tweeted Friday about Biden’s newfound opposition to the Iraq war. Axelrod warned that Biden’s gaffes have moved from “harmless” to being “in danger of creating a more damaging meme.”

“It’s one thing to have a well-earned rep for goofy, harmless gaffes,” Axelrod tweeted. “It’s another if you serially distort your own record. Joe Biden is in danger of creating a more damaging meme.” 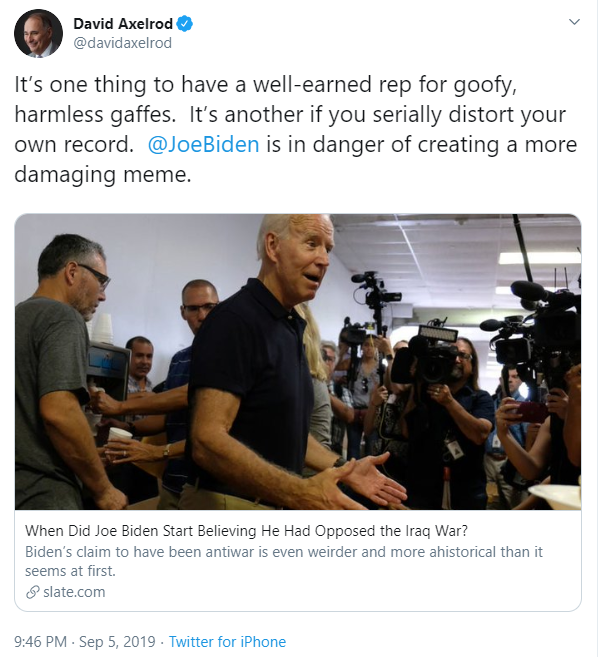 Biden told NPR Tuesday that he opposed the Iraq war since the very beginning, but review of his policy decisions reveals that this was not the case while in office, according to CNN.

“Immediately, that moment it started, I came out against the war at that moment,” Biden told NPR.

Though Biden claims that he was opposed to the Iraq war, the former vice president was not decidedly against taking action against Saddam Hussein. Biden also voted to authorize war and defended his vote for months after the United States began a military campaign, according to CNN.

“Nine months ago, I voted with my colleagues to give the president of the United States of America the authority to use force and I would vote that way again today. It was the right vote then and would be a correct vote today,” Biden said in July 2003 in a speech at the Brookings Institution, CNN reports.

The Biden campaign did not respond to a request for comment from the Daily Caller News Foundation.