Posted by: Shelby Talcott in US News September 3, 2019 Comments Off on Labor Employee Resigns Amid Bloomberg Law Report Over 2016 Joke

A newly appointed Labor Department official resigned after Bloomberg Law requested comment from the White House about a 2016 joke posted on the labor employee’s Facebook page.

Leif Olson worked at the Department of Labor (DOL) for just 18 days before resigning, Bloomberg Law reported. Olsen wrote a Facebook comment “suggesting the Jewish-controlled media ‘protects their own,’” but the article cropped out a comment on Olson’s post stating that his message was a joke.

The editors for the Bloomberg Law did not respond to a request for comment on cropping out the statement showing Olson’s thread was a joke. 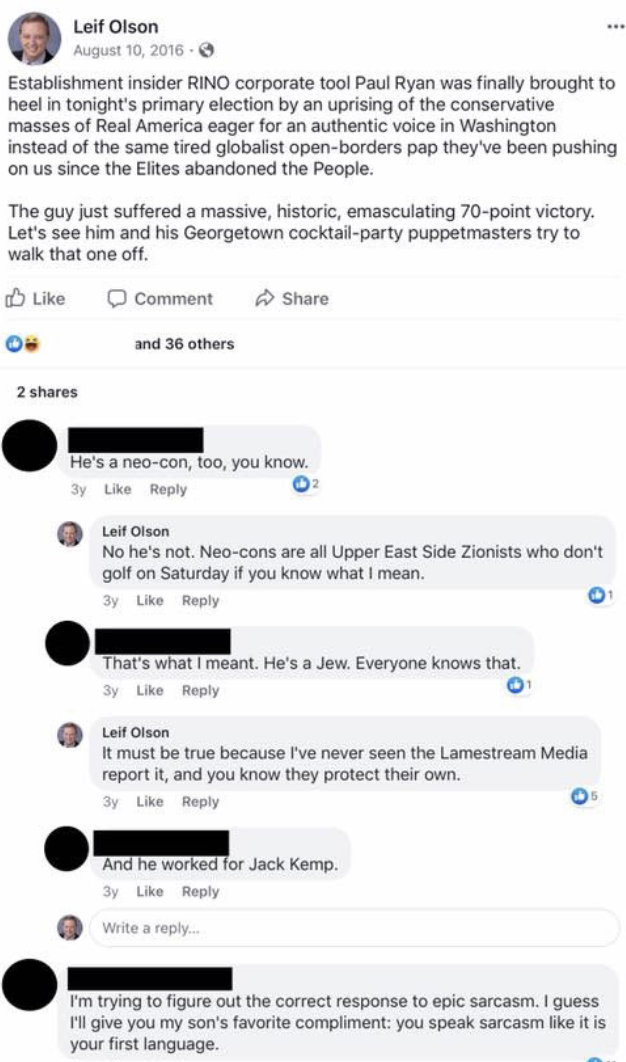 Bloomberg Law cropped out the portion of the thread which asserted that Olson’s comments were a joke. (Screenshot Facebook)

“It was sarcastic criticism of the alt-right’s conspiracy theories and anti-Semitic positions,” Olson said in an interview according to Bloomberg Law.

Senior editor at The Federalist Mollie Hemingway tweeted that the article was “dangerous and malicious propaganda against Republicans.”

This is how Bloomberg News and “reporter” @Benjaminpenn
described blindingly obvious and eviscerating MOCKERY of anti-Semitism by a Trump official. His editors supported the publication of these damaging lies. Dangerous and malicious propaganda against Republicans. pic.twitter.com/9qo3HrGEh0

Rod Dreher, a senior editor at The American Conservative, tweeted that the article was “a revolting smear,” adding that it’s “a perfect example of how (according to a defector friend) our society is coming to resemble communism: leftist media figures will distort and even lie to destroy reputations and careers of their perceived enemies.”

“These Facebook posts all read as really obvious sarcasm, a fact that is even more clear if you know anything at all about Paul Ryan’s primary opponent,” Matthew Gertz, a senior fellow at Media Matters for America, wrote.

Ben Shapiro, a political commentator, also tweeted out against the article, writing that it is “a joke.”

This article is a joke. The comments in question are so obviously sarcastic it would take willful blindness to miss it. Fortunately, Bloomberg has plenty of that to go around, apparently. https://t.co/CX1SfGuEar

Bloomberg Law reporter Ben Penn described Olson as “an unsuccessful GOP candidate in 2012,” adding that he “fired off a series of late-night posts on his personal Facebook page three years ago.”

The posts “started as a sarcastic quip” and “devolved into an exchange referencing two anti-Semitic tropes: that Jews control the media and that they look out for members of their own faith,” Penn alleged.

“This is the latest in a series of mishaps under the Trump administration personnel vetting system,” Penn tweeted Tuesday. “What makes this one remarkable is that Olson’s Facebook page was public to his non-friends. Any cursory screening of his social media accounts could’ve uncovered the anti-Semitism.”