The world champion US Women’s Soccer team traveled to California to combine their misplaced outrage with that of Hollywood actresses. The goal is for both groups to combine intangible athletic and showbiz popularity and demand corporate America solve a problem that doesn’t exist.

If they get their wish, it should result in a major pay cut for the women’s team, 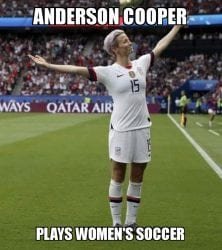 WoePost columnist Sally Jenkins has been drum–beating for female soccer pay equity in a series of increasingly strident columns. If you can get past the slightly creepy gushing over the women’s physique (imagine if Curt Schilling had written this) “Alyssa Naeher, tautly muscled and flying through the air…”

True–believer Jenkins rails, “So I don’t give a rip about FIFA revenue generated by men’s teams in Germany or Brazil. American soccer officials answer to American laws on equal pay for equal work…I also don’t want to hear another word about the bigger size of revenue in the men’s World Cup.”

In spite of Sally’s insistence we not confuse her with the facts there is no way to get to the bottom of the equal–pay–for–equal–work issue without the use of numbers.

In the corporate arena — where Jenkins appears to think Titans of Industry are cowering with their hands crossed over the family jewels hoping Ms. Purple Hair won’t send a penalty kick screaming toward their groin — there is no pay gap.

I’ll take the risk of incurring Sally’s wrath by using an analysis from the Heritage Foundation. The so–called “pay gap” is based on a comparison of the median earnings of every woman compared to every man. It’s not a valid comparison because it ignores variables like “education, occupation, experience and hours, which account for nearly all of the differential in earnings between men and women.”

Once those factors are added it “eliminates all but an estimated 3 to 5 cents of the gender pay gap.” Ah ha! A nickel is still a nickel! Turns out that’s illusory, too. That differential is explained by “women’s preference for greater flexibility” in their occupations that “accounts for some — if not all — of the remaining pay gap.”

Okay. Angry female ballerina ball players bringing corporate America to its knees was a stretch anyway, but what about those fat, greasy chauvinists at US Soccer who really make Sally’s blood boil? They pay the women like sharecroppers on a plantation!

Frankly, I’d be in favor of paying the women the same as the men when they can beat the men on the soccer field. Biology is a harsh mistress and so is ticket and television revenue. This is why even the most talented player in the Lingerie Football League makes a fraction of the salary of a player on the NFL’s worst Arizona Cardinals.

Only that’s not the case here. US women’s soccer team players are paid MORE than male players!

US Soccer, the cruel corporate overlords of our feminine heroes, released an independently audited ten years of internal financials. Let the petard hoisting begin. “From 2010 through 2018, U.S. Soccer paid our women $34.1 million in salaries and game bonuses and we paid our men $26.4 million — not counting the significant additional value of various benefits that our women’s players receive but which our men do not.”

This means that for the Purple–Haired Norma Rae to be paid on an equal basis with the men, she would need to accept a 23 percent pay CUT. Something tells me this isn’t what the Trump and flag hater has in mind.

Team Estrogen has also been peddling a hypothetical 20–friendly season where they earn 38 cents for every dollar the losers on the men’s team grab. A conjecture Jenkins fell for hook, line and sinker.

This is what happens when you let jocks loose in the economics department. Women soccer players in the US make more than the men. It’s part of the contract they negotiated with US Soccer and they approved. The only reason they are griping now is because they fell for leftist fantasies of injustice, victimhood for alphabet crusaders and a general distaste for capitalism while ignoring the specifics of their own situation.

I eagerly await Sally’s next update on the situation.