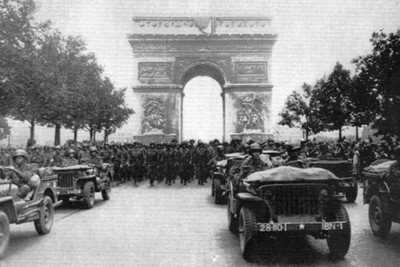 World War II Army Tech. Sgt. Francis J. Clark was part of the famed 28th Infantry Division that was the first American military unit to parade down the Champs-Elysees during the Liberation of Paris on Aug. 29, 1944 — an anniversary that was celebrated with great fanfare over the weekend.

Clark is the only World War II soldier from the 28th to have earned the Medal of Honor. He’s also one of the few men to have earned it for more than one action during war. In his case, the incidents came about a week and a country apart — in Luxembourg, then in Germany.

Clark was born April 22, 1912, in Whitehall, New York. While not much has been published about his early life, records show he was working as a woodworker when he was drafted into the Army in March 1942.

Two and a half years later, he was fighting across the European continent with Company K in the 28th ID’s 109th Infantry.

On Sept. 12, 1944, two platoons in his company were crossing the Our River near Kalborn, Luxembourg, to get to higher ground on the other side. Thanks to an early morning fog, Clark and his platoon safely made it across. The fog lifted by the time the second platoon reached shore, though, and they were hit by gunfire, which killed the two men in charge and pinned the rest down.

Clark saw what was happening and crawled across a field riddled with gunfire to reach the stuck platoon. He led the survivors to safety, then turned around and went back to rescue a wounded soldier, all while enemy gunfire continued to try to cut him down.

Later, Clark led his squad and the men from the rescued platoon “in dangerous sorties against strong enemy positions to weaken them by lightning-like jabs,” the citation read. During this time, Clark killed two enemy machine gunners with hand grenades. He continued to put himself in danger, running toward the fight, killing and wounding several enemies, scattering German patrols and eventually forcing a full company of heavily armed Germans to withdraw.

Five days later, on Sept. 17, Clark’s unit had moved northeast and across the border into Sevenig, Germany. Clark single-handedly killed an enemy machine gunner and forced another to flee before the Germans came at them hard, taking out a lot of the soldiers in Company K. Seeing that they were left without leadership, Clark stepped up and took command. He was wounded the next day, but he refused to be evacuated.

By daybreak on the 19th, Clark managed to kill three more Germans, one of whom was trying to set up a machine gun only five yards away. Later that day, he braved more gunfire to deliver food and water to an isolated U.S. platoon.

Clark assumed leadership when it was desperately needed. His actions were essential to keeping up the spirits of the hard-hit troops of Company K.

For his efforts, Clark received the Medal of Honor from President Harry S. Truman on Aug. 23, 1945, during a White House ceremony that included several other recipients. Clark brought his wife and mother to the event.

After the war, Clark left the Army and moved back to where he entered service — Salem, New York. He farmed and worked at a furniture factory and eventually became active in local politics, serving a few different positions in his town and county.

Clark was 69 when he died in October 1981. He was buried in Salem at Evergreen Cemetery.

In November 1990, American Legion Post 812 in New York was renamed in his honor.

So was a Harrisburg, Pennsylvania, military post building in 2015.

‘Ridiculous’: Trump Hits Back Over Axios Scoop That He Suggested Nuking Hurricanes

Democrat Lies Are About to Destroy Their Party