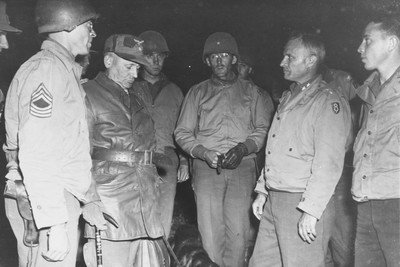 The invasion of Normandy on June 6, 1944, gave the Allies a foothold on the European continent, but a lot more needed to be done to keep it in place. Army Sgt. John J. McVeigh was one of the thousands of men tasked with strengthening that foothold. He died during his mission, but his effort earned him the Medal of Honor.

McVeigh was born in 1921 in Philadelphia. He was drafted into the Army in 1942, and within two years, he found himself a sergeant with the 23rd Infantry Regiment, 2nd Infantry Division.

McVeigh earned the nation’s highest award for valor during the Battle for Brest 75 years ago. It was one of the fiercest battles of World War II’s Operation Cobra, which was the Allied breakout of the Normandy area that began July 27, 1944.

Brest, France, was an important port to the Allies during that summer. To successfully keep their foothold in Europe, it was necessary to capture port facilities across France so enormous amounts of wartime goods could be delivered to supply the invading forces during their push east.

Americans breached the town of Brest on Aug. 7, and after extra reinforcements moved in, they were able to surround the city, trapping thousands of German soldiers who had dug in to fortify their position. A full assault was launched Aug. 25.

Defending At All Costs

Shortly after dusk four days later, on Aug. 29, 1944, McVeigh’s platoon was near the town and had just begun to assume defensive positions along a hedge when the enemy counterattacked. Since McVeigh’s platoon wasn’t dug in, part of their defensive line sagged briefly under heavy fire, leaving a section of heavy machine guns with a lot of space in front of them and no rifle protection.

The Germans moved quickly and were almost on top of one of the machine gun positions where McVeigh was. Without pause, he stood up in full view of the enemy and directed his squad to fire on them, despite the heavy fire that was coming his way. His position was close to being overrun when he pulled out a trench knife — his last remaining weapon — and charged several of the Germans.

McVeigh killed one German with the knife and was headed toward three more when he was shot and killed at point-blank range. But his heroic drive to stop the Germans gave two other soldiers time to kill the three men McVeigh was headed for, then concentrate their machine gun fire on the rest of the attackers. Between the platoon’s two machine guns, they were finally able to stop the flow of men charging at them. It also gave an accompanying rifle platoon time to reorganize and hold the high ground they had gained earlier in the day.

The Battle for Brest ended up being a long and deadly siege. The town was destroyed by the time the Germans surrendered on Sept. 18, and by then, Brest had no strategic value left, as the Allied front had managed to push east nearly to the German border.

But McVeigh’s heroics will always be remembered. The sergeant, who was about a month shy of his 23rd birthday when he died, posthumously received the Medal of Honor on April 6, 1945.

McVeigh’s remains were repatriated to the U.S. after the war. He was laid to rest in the Holy Sepulcher Cemetery in Cheltenham, Pennsylvania.