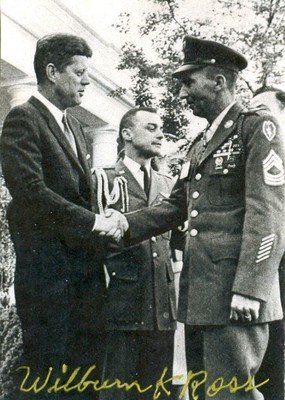 Few World War II veterans can say they earned not just America’s highest medal for valor, but France’s as well. Army Pvt. Wilburn Ross is part of an elite group who can.

Ross single-handedly took out nearly 60 Germans in a five-hour period in 1944, saving his depleted company from an elite German force.

Ross was born May 12, 1922, and grew up on a farm in Kentucky. When World War II broke out, he moved to Virginia to be a shipyard welder. Not long after that, in 1942, he was drafted into the Army and quickly sent to the Western Front as a machine gunner with the 30th Infantry Regiment, 3rd Infantry Division.

Ross saw combat in Morocco and Italy and took part in the mid-August 1944 invasion of southern France known as Operation Dragoon. It was a lesser-known invasion than northern France’s D-Day, but just as important. During Dragoon, Ross’s unit landed along the French Riviera, quickly secured the beachhead and pushed inland. According to the Seattle Times, Ross was injured by a grenade explosion to the cheek, but he recovered and continued on with his company, which regrouped with several other Allied armies in mid-September to begin the drive toward Germany.

Ross’s division was moving east through the Vosges Mountains when he earned his Medal of Honor.

On Oct. 30, 1944, Ross’ unit was fighting an entrenched group of elite German mountain soldiers, and they were losing badly — 55 of 88 men in his company had been lost by noon. But that didn’t make Ross weary; instead, he pushed even harder to prevail.

Armed with a light machine gun, Ross managed to make his way to the front of the line, 10 yards ahead of the forward-most riflemen, so he could repel the attackers. It worked several times, despite the growing number of rifle and grenade explosions landing near him.

By the eighth German assault, most of the U.S. soldiers on the front line were out of ammunition. Ross continued to fire, single-handedly holding off the Germans as, one by one, his comrades crawled up to him to collect rounds they could use from his ammunition belt. As this was going on, enemy soldiers with grenades had crawled to within four yards of Ross, but he was able to repel them, too, hurling the grenades back at them.

Eventually, Ross also ran out of ammo. He was advised to withdraw to the company’s command post, but he heard more ammo was on its way, so he declined.

Meanwhile, the Germans were desperately trying to take Ross out. After all, his machine gun was standing between them and a decisive breakthrough.

During the last German attempt, Ross’ comrades were preparing for a last-ditch stand, fixing bayonets on their rifles as the enemy drew closer. But just before the Germans could swarm his position, the ammo to resupply them arrived. Ross reloaded and blasted his way through the enemy crowd, killing 40 and wounding 10 more. His efforts alone broke their will, and the Germans retreated.

During five hours of continuous combat, Ross killed or wounded at least 58 Germans. To ensure the remaining members of his unit survived, he stayed in position for 36 hours. His actions were an inspiration to his fellow soldiers.

On April 23, 1945, Ross was one of five members of the 3rd Infantry Division to be honored with the Medal of Honor in a ceremony at Zeppelin Field in Nuremberg, Germany — Hitler’s once-thriving Nazi rally grounds.

After the war, Ross got married and had six children. He stayed in the military and served in the Korean War before he decided to retire as a master sergeant in 1964. Ross eventually settled down in DuPont, Washington, where he remained active in the veteran community.

In 2010 – 65 years after he received the Medal of Honor — Ross and a few other soldiers were presented with the French Legion of Honor, the highest decoration bestowed by France for military service, for their actions during Operation Dragoon.

The accolades have continued since. A Veterans of Foreign Wars post was renamed in Ross’ honor in 2011, as was a nature trail in DuPont and a Kentucky highway near where he grew up. Ross was also one of 12 Medal of Honor recipients featured on postage stamps released in 2013.