Posted by: C. Todd Lopez in In The News, Military and Defense, Syndicated Posts, US News August 14, 2019 Comments Off on Hypersonics Remain Top Priority for Defense Department 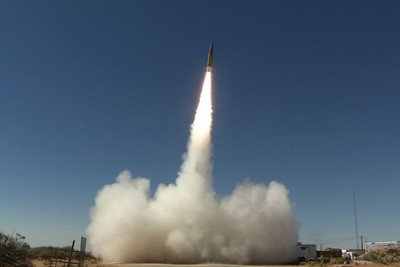 A hypersonic weapon moving at five times the speed of sound can travel across the Pacific Ocean in just over 100 minutes and U.S. adversaries are developing such weapons now, said Michael D. Griffin, undersecretary of defense for research and engineering.

“They are quite capable,” Griffin said. “The advantage offered by a hypersonic offense is that it overflies air defenses as we understand them today, and it underflies our missile defenses. It goes into the gap between air defense and missile defense.”

Dealing with the hypersonic threat is even more of an interdisciplinary and multidisciplinary problem than ground missile defense was.”

Michael D. Griffin, undersecretary of defense for research and engineering

“By the time we can see it on defensive radar systems, it’s nearly too late to close the kill chain,” he said. “It would be difficult to close that kill chain for one threat. But in a raid scenario, you just can’t get there from here, … so we have to see them coming from further out.”

“We need a proliferated layer of sensors, because we can’t see these things from a few spacecraft in geostationary orbit,” he said. “So the requirement leads you to a proliferated sensor layer in relatively much lower orbit.”

Griffin said it’s the Missile Defense Agency where the Hypersonic and Ballistic Tracking Space Sensor will be developed.

Connecting those sensors together into a network, he said, is a separate problem being developed at the Space Development Agency. He described what they’ve been asked to do as “a resilient, highly proliferated mesh network communications system in low Earth orbit, … similar to what you see commercial companies talking about for LEO broadband.”

That communications layer, he said, is central to hypersonic defense.

“The sensor layer is critical, but if it can’t talk among itself, it will not be effective,” Griffin said. “The ability to communicate underlays every other layer we wish to deploy, whether it is for space situational awareness, or hypersonic threat detection and tracking, or maritime domain awareness, or whatever. Whatever other functions we want, they are enabled first by the ability to communicate in a resilient fashion, which we don’t have today.”

Hypersonic defense, he said, is not limited to just the Missile Defense Agency and the Space Development Agency. It’s an across-DOD effort that touches nearly everything.

“It touches space, it touches ground stations, it touches detection and tracking algorithms, and fire control algorithms,” the undersecretary said. “Dealing with the hypersonic threat is even more of an interdisciplinary and multidisciplinary problem than ground missile defense was.”

Sponsored Content
2019-08-14
C. Todd Lopez
0
Previous: SNC Selects ULA for Dream Chaser® Spacecraft Launches
Next: If the FBI Shut Down the KKK Once, Can’t They Do It Again?