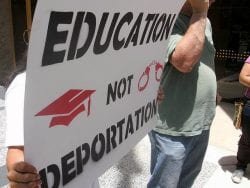 At no other time in history do we owe so much to our younger generations for horribly abusing them. The abuses forced upon US children are disgraceful – even compared to third world countries!

Facts are finally being exposed about the Democrat Party’s Teacher Union educational achievement cloak of secrecy and out into the public arena.

American children are leaving our so-called educational centers (high school & colleges) with about as much knowledge as they enter having no abilities to compete or understand ‘reality.’ In Baltimore, not even one student reads at grade level or is proficient in math!

Government, American History, English, Science, Literature, Math, World History, and other ‘rudimentary’ educational standards are no longer found within academia. Is this intentional?

Do any of these classes prepare anyone for a fulfilled successful adult life? Nope! We can see it in action when the Democrats sound their bugles and call them into the streets to protest issues they can’t even explain.

How is it possible for America to ever decide to toss our children under the bus? How does any Political leader sit idle when we have such a major crisis in America?

When Americans are exposed to the evil scams Jeffrey Epstein pulled on our children, Americans fake outrage! However, the educational sins creating vulnerable children are seemingly okay!

Again, Politicians to the rescue to medicate the symptoms but never the disease, right? Instead, our best and brightest warriors are off to fight the ‘real’ issues in America like plastic straws and bags, banning guns, the global warming hoax, boycotting Israel, Russia hoax, taking down a duly elected President, and similar ilk!

How does that work for America? Is there a massive difference between Jeffrey Epstein’s sexual abuses Vs educator intelligence abuse? Which disease forces the victim to suffer the most?

Yes, our Government Educational monopolies are doing great damage and a disservice to millions of American youth.

Once Democrats were able to monopolize our educational systems through their labor union partners, our children were no longer a part of the educational equation for American educational goals to lead the world in math, science, entertainment, engineering, and other valuable disciplines.

Every child registered in public education is an automatic contribution to the Democrat Party. Ever wonder why Democrats want our public schools packed with illegal aliens? Wonder no longer!

Yes, education serves the Democrat Party very richly. As in any political “greed scheme,” programs, players, and logic is cast aside in favor of scams to increase financial gain and power.

Turning our back on generations of children is what has been done with public education. It is not only shameful and a disgrace, but a disease medically diagnosed as a mental illness. It’s called Liberalism.

Liberalism is a difficult disease to understand. No, there is no known medication to cure it. Instead, it requires an indoctrination into ‘real world’ life and solutions.

It’s especially a difficult treatment when one is taught all of their lives to reject fact and truth and never verify – otherwise one must accept the reality of a failing grade!

Unfortunately, Liberalism has infected the entire Democrat Party as well as many Republicans. Let no one doubt about why these people act and do insane things.

Consider statements like, “We should spend out way out of debt.” Is this reality or insanity? If such an insane philosophy would be personally attempted, bankruptcy court is just moments away!

None-the-less, Democrats openly make such statements but if anyone disagrees, then they become ‘racists.’ Isn’t that a further example of insanity?

Imagine how cold-hearted Democrats and Republicans have become to watch millions of our children fail academically and choose to do nothing about it!

What’s even worse, is they sit idle without shame, apology, or apparently no regret! That too would be a prime example of insanity, right?

Democrat reactions to school choice and/or ‘voucher programs’ is similarly insane. Instead of wanting the best possible education for our children – especially in poor neighborhoods, Democrats demand they stay in their place of failing and unsafe schools!

Even when it means degrading the US Military with threats to cut Military budgets, there are no limits to Democrat’s lust for money and power. If you dare interfere with the Democrat’s money-laundering Teacher Union slot-machine scams, they’ll deny Military children an education.

Meanwhile, Republicans are well informed about these scams so what does it say about the core principles of Republicans? Most of us understand not responding to any heinous act is an answer and even being an accomplice, right?

Since the Department of Justice won’t get involved in political sins, Americans must not forget or challenge Republicans when we go to the voting booths. An ‘R’ beside one’s name doesn’t stand for automatic ‘Righteousness.’

The only possible hope for any resolution to the massive problems America faces in education is President Trump. Please do not hesitate to contact his staff and give them ideas about how to correct the educational swamp and give a big win to our children!

America must adopt a zero-tolerance for child abuse, and it begins with educators being properly trained to teach fact and truth and get rid of ‘PC’ politics in education. We must return to the three R’s!

Hebrews 5:11-14 Of whom we have many things (critical information) to say, and hard to be uttered (difficult to explain to unlearned people), seeing ye are dull of hearing (don’t want to or not possible to learn). For when for the time ye ought to be teachers (learned adults), ye have need that one teach you again (go back to ABC’s) which be the first principles of the oracles of God (just because we are adults doesn’t mean we are learned in facts but need to be educated); and are become such as have need of milk (instead of adults full of wisdom, we are babies, ignorant, and still on the teat), and not of strong meat (able to digest higher levels of education). For everyone that useth milk is unskilful (ignorant living in imperfection) in the word of righteousness (everything good and decent within life you can’t comprehend): for he is a babe (still in diapers and unable to function in society). But strong meat belongeth to them that are of full age (matured mentally and physically), even those who by reason of use have their senses exercised to discern both good and evil (able to function in the real world using fact and truth – not wives tales or propaganda).