The Democratic presidential candidate unveiled his five-point plan a day after he announced a reset of his campaign. O’Rourke, who is polling in the low single digits, suspended his campaign after a mass shooting in his hometown of El Paso on Aug. 3. Patrick Crusius, 21, killed 22 people in what is being investigated as an act of domestic terrorism and a potential hate crime.

While most Democratic presidential contenders support expanding gun control measures, only New York Sen. Kirsten Gillibrand has gone as far as O’Rourke in calling for mandatory buybacks and a national licensing system.

He also reiterated support for universal background checks and enacting so-called “red flag” last that have been passed in the House. 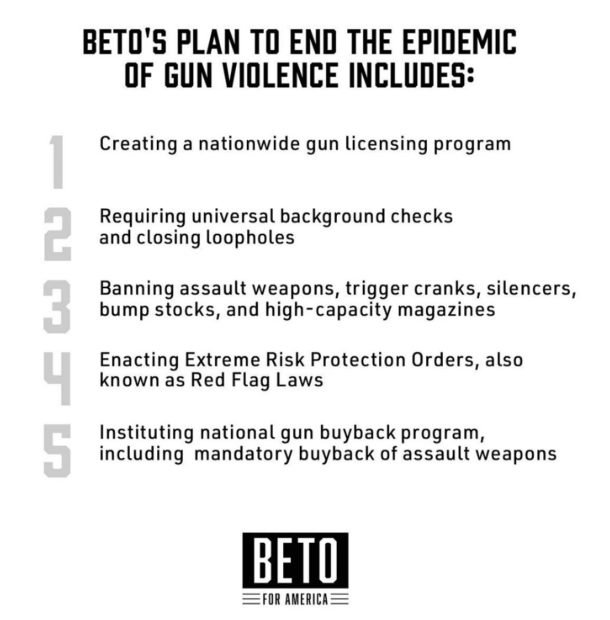 “Today, we are releasing our plan to prevent atrocities like these from happening again—a plan which would not only reduce gun violence, but also combat the spread of hate and white nationalism taking place through online radicalization,” O’Rourke wrote on Instagram.

O’Rourke said in an interview days after the El Paso shooting that he was “open” to a gun licensing system, as well as mandatory buy backs like one implemented in Australia in 1996.

The Australian government commandeered 700,000 semi-automatic weapons and shotguns as part of the program, which followed an April 28, 1996 mass shooting that left 35 people dead.

Support Conservative Daily News with a small donation via Paypal or credit card that will go towards supporting the news and commentary you've come to appreciate.
Tags
2020 Election News Beto O'Rourke Gun control