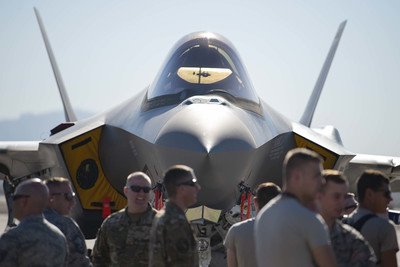 The Wright brothers developed their first successful powered airplane in 1903, and it didn’t take long for the U.S. military to know it wanted in on the action. A few years later, that became reality. Here’s the story of the military’s first airplane.

By 1907, the Army Signal Corps was preparing itself for flight — although it wasn’t yet sure by what means. It created an Aeronautical Division that consisted of three first lieutenants willing to work in the budding field of aviation.

Two years later, on Aug. 2, 1909 — 110 years ago — the military began its grand aviation adventure when the Wright brothers delivered their first plane to the Signal Corps. The Army paid $30,000 for the aircraft, a Wright A Flyer. It was given the name Signal Corps No. 1, but was generally just known as the Wright Military Flyer.

Leading up to that, though, they needed to make sure the plane worked. In August 1908, Orville Wright brought an aircraft to the parade grounds at Fort Myer, Virginia, near Arlington National Cemetery, for flight trials.

But there were some failures with that plane, which led to the death of one of the Aeronautical Division’s first lieutenants, Thomas Selfridge. He became the first powered airplane casualty.

After that, the Wrights took their plane back home to North Carolina and returned to Fort Myer in June 1909 with a new and improved version: the Wright Military Flyer.

According to Air Force Magazine, the plane carried two people and had skids instead of wheels. It was launched from a monorail track and was powered along by propellers, sometimes with the help of a catapult on days where there was no wind. When it reached takeoff speed, the pilot pulled back on the elevator lever, and the plane would rise into the air.

Records show there were no instruments other than an eight-inch piece of string tied to the crossbar between the two skids. The string served as a crude turn-and-bank indicator, depending on which direction it blew.

In late July 1909, Orville Wright and another first lieutenant from the Aeronautical Division, Benjamin Foulois, took the plane for a speed test on its final qualifying flight. It successfully flew south about 5 miles before turning back. The craft reached an altitude of 400 feet and averaged 42.5 miles per hour.

Three days later, the plane belonged to the U.S. Army.

Soon thereafter, the flying program moved to a field in College Park, Maryland, and it resumed in October 1909, with the Wright brothers training a few more men on how to fly. On Oct. 26, 2nd Lt. Fred Humphreys became the first Army officer to fly solo.

It’s been a wild ride in the 110 years since that first purchase. By 1914, the Army and Navy operated aviation squads. Nowadays, in the age of the fighter jet, the B-2 stealth bomber, planes that can refuel other planes  in the air, and cargo planes like the LC-130 Hercules with its missions to Antarctica, military aviation has grown exponentially.

Just imagine where we’ll be in another 100 years!

Support Conservative Daily News with a small donation via Paypal or credit card that will go towards supporting the news and commentary you've come to appreciate.
Katie LangeAugust 1, 2019
Facebook Twitter Reddit Telegram Share via Email Print