President Trump held a wild and exciting rally in Greenville, North Carolina Wed, night and left nothing on the field so to speak. As with all his rallies, there were thousands in attendance at the sold out to capacity arena with many more outside the arena in the sweltering heat.

President held nothing back in going after the ‘angry’ Democratic lawmakers who also recently took aim at their own House speaker. During the rally, he slammed the four progressive congresswomen known as the “squad” — Reps. Ilhan Omar of Minnesota, Rashida Tlaib of Michigan, Alexandria Ocasio-Cortez of New York and Ayanna Pressley of Massachusetts. This is  the group of House Democrats he’s been sparring with after they decided a tweet he sent out over the weekend about them was “racist.”

“If they don’t love [our country], tell them to leave it,” Trump said of the lawmakers, all elected during the 2018 midterms.

Trump blasted Omar, who is Somali-born, noting that she “smeared U.S. service members in ‘Black Hawk Down.’ She slandered the brave Americans trying to keep peace in Somalia.”

Trump said Omar blamed America for the economic crisis in Venezuela — and that she refused to condemn al-Qaida. “That’s not somebody who loves our country,” Trump said as the crowd chanted “send her back.”

“Omar”, said Trump, “also said that terrorism was “a reaction’ to America’s involvement in other countries’ affairs.

The president also criticized Rashida Tlaib, saying she “used the F-word to describe the presidency and your president, “That’s not nice, even for me,” Trump said.

The president went after Ocasio-Cortez, too, whom he mocked for her “three different names.” He lightheartedly said he would be referring to her as “Cortez” because it was shorter and he didn’t have a lot of time — drawing laughs from supporters.

But he was angry the New York Democrat wrongly described the migrant detention facilities at the southern border as “concentration camps.”

“They’re so angry,” said Trump of the four Democrats.

“They [were] trying to be nice [during their press conference the other day], but it’s so hard — it’s so hard for them to do that.”

“She looks down with contempt on the hard-working Americans, saying that ignorance is pervasive in many parts of this country,” Trump said during the rally, prompting the chant “send her back”.

Omar responded to Trump’s rally with a poem by Maya Angelou saying, 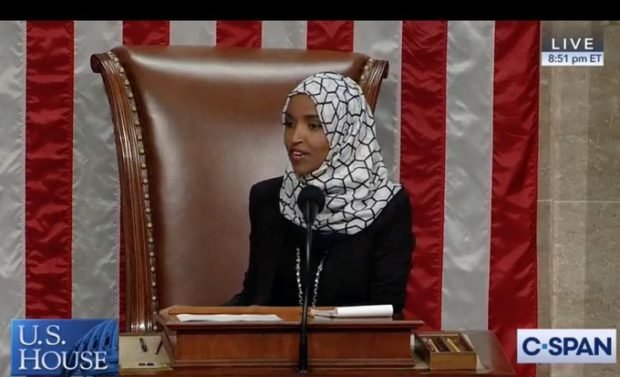 Oh, how sweet!!! Now Ilhan “it’s all about the Benjamins, baby” is quoting Maya Angelou. She needs more than a poem to hide her racist hatred for America..The one who cannot bring herself to clearly denounce anti-semitism or the ISIS affiliate in Somalia is now the poor, poor victim. Has anyone heard her say ONE thing appreciative about the country who saved her butt from those she cannot denounce?  The country that gave her the opportunity to be educated and serve in a high public office?  Just one quote from poor Ilhan of praise for the USA?

“I am where I belong, at the people’s house and you’re just gonna have to deal!” she tweeted.

That’s a pretty angry response coming from someone who is supposed to be so caring. Telling us we’re just going to have to deal with her after she’s made so many anti-American and anti-Semitic responses lately. Such arrogance coming from someone accusing Trump of being a bully and arrogant – typical Alinsky liberal hypocrit.

Omar on Thursday stressed the importance of lawmakers sending the message that we’re “all welcome, irregardless of what he says.”

“And so I’m going to go vote on minimum wage and uplift millions of people,” she said, stepping into the House chamber as lawmakers were about to pass legislation to raise the minimum wage to $15 per hour.

Yes raise the minimum wage to $15 an hour and watch everything else go up and some small companies go out of business.

Lawmakers on Thursday expressed alarm over the threats toward freshman Rep. Ilhan Omar (D-Minn.) after a crowd at President Trump’s rally the night before chanted “send her back.”

Multiple Democrats are calling for more enhanced security for members of Congress, including Omar and her three closest allies who were also targeted by Trump earlier this week when he suggested they all “go back” to their countries and try to help them out even though he probably did not realize that three were from here.

Rep. Al Green (D-Texas) announced on the House floor that he plans to introduce legislation asking for more security resources for lawmakers. While members of leadership in both parties have dedicated security details, rank-and-file members do not.

“This is an important time in this country. These are dangerous times. Every member of this House needs additional security,” Green said.

Rep. Alexandria Ocasio-Cortez (D-N.Y.), one of the four lawmakers targeted by Trump this week, said Thursday that she’s concerned for her safety amid heightened attacks from President Trump on her and the members of her “squad,” accusing the president of targeting the minority lawmakers at risk of inciting violence against them.

Asked if she is concerned about her security, Ocasio-Cortez was blunt.

“Of course. I think part of the point is to target us,” she said. “The President is evolving, as predicted, deeper into. … the rhetoric of racism which evolves into violence.”

She added: “It’s natural to be concerned about our security.”

She is in no position to talk since it was her rhetoric comparing immigrants in detention centers to concentration camps that caused a deranged maniac to attack one center and kill a guard there before he was killed from doing more damage.

The day each of these four women were elected they criticized and one cursed the President. That’s not how to start a conversation. He fought back. Trump’s a counter puncher. You hit him and he hits back. It’s a battle of wits and they are unarmed.

If you missed the rally you can see it here.