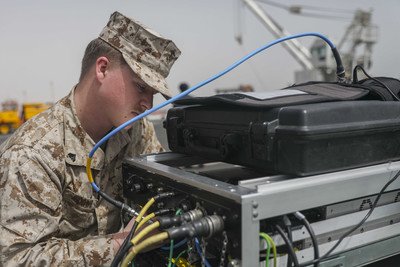 The space domain is vital to warfighters, with information from satellites used for such things as communications, missile tracking and navigation.

However, there are gaps that near-peer competitors such as China could exploit, said Derek M. Tournear, acting director of the Defense Department’s Space Development Agency. Exploitation could include spoofing, cyberattacks, jamming and even satellite kill vehicles, he added.

Tournear provided an overview of SDA at the SDA Industry Day at the Aerospace Chantilly Campus in Chantilly, Va.

In line with the National Defense Strategy’s emphasis on the importance of the space domain, the SDA was stood up March 12 to address the capability gaps and to assist the military services in their own space efforts without duplicating effort, he said.

Through an aggressive series of two-year spiral development cycles that include demonstrations, wargaming and experiments, the agency, in concert with its commercial and government partners, intends to field a number of systems that include solutions such as:

Tournear said the solutions “must be driven by threats, be cost-effective and be shown to directly benefit the warfighter.” He added that he expects some of the capabilities to be ready for deployment in two years.

He told hundreds of industry representatives in attendance that SDA needs their help and that the “trade space is wide open” to their ideas.

Michael D. Griffin, undersecretary of defense for research and engineering, which provides oversight of SDA, said one reason that SDA came about was that adversaries were acquiring advanced technologies in three to five years, and the U.S. timeline extended 10 to 15 years.

SDA’s acquisition strategy is designed to rapidly develop capability that’s responsive to any threat, is cost effective, and has agility to shift to technologies that are disruptive or more effective, Griffin said. The strategy is to mass-produce inexpensive satellites that ensure redundancy and make it much more difficult for adversaries to take them all out, he explained.

Satellites in low Earth orbit are particularly useful, he said, because it’s easier to identify the fingerprint of the adversary who targeted them than those in deeper space.

Another important function of SDA, he said, is to facilitate communication between the military services and other government agencies involved in space, such as the National Reconnaissance Organization.

The communication piece is important, Griffin said, because each organization needs to know what the other is doing to avoid duplication and to identify gaps in capability that SDA and industry can address.