Its’ gonna be a big heart Breaker/ Grandma needs a new pacemaker/ And the doctor says I realize she’s ill/ But there’s been some legislation on all our medications/And All I can do is put her on a pain pill.—-Singer, songwriter and satirist, Ray Stevens on his song about Obamacare.

Ray was absolutely right when he wrote that song about Obamacare and now democrats with their Medicare for all scam, er, I mean plan, is the same thing, it’s Obamacare redux. It will be rationed care to pay for everything and just like in all the countries with socialized medicine that they proudly point to, people who are senior citizens 55 and over who need it the most will get the least care and younger people who will be paying for it through the nose (only they don’t know it yet) and need it the least will get the best care.

The American Medical Association (AMA) gathered in Chicago earlier this month for its annual meeting. The group, composed of over 200,000 doctors, voted to maintain its opposition of Medicare for All despite protesters gathered on the street outside.

The healthcare lobby group invited Seema Verma, head of the Centers for Medicare and Medicaid Services (CMS) to speak. In her speech, she argued that Medicare for All would lead to decreased payments to doctors, increased taxes, and rationed healthcare. 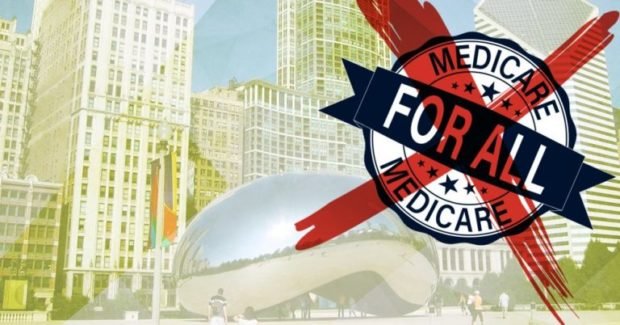 At his recent town hall, Bernie Sanders said people doesn’t mind paying higher taxes if it means better healthcare and the audience applauded him. Really? They don’t mind paying more in taxes? They think the rich will pay for everything, not them. Boy, are they in for a surprise. The Dems love to say the rich will pay for it and they intend to tax the rich between70- 90%. When you tax the rich they just pass it on down. The rich are not people like Disneys Uncle Scrooge sitting on bags of money filling up their cellar. No, the rich are people who work12-15 hours a day sometimes seven days a week and don’t take vacations. Why should someone who works so hard be taxed so much? The rich are people who own companies and hire people. When their taxes go up they lay people off and don’t give raises and don’t hire people like they used to. The rich are people who buy expensive houses, cars, yachts and jewelry and that all goes back into the economy. When they are taxed they just pass it down to their employees.

Sanders’ office has not done a cost analysis, a spokesman said. His 2016 presidential campaign website cites an estimated price tag of $1.38 trillion a year for an earlier version of the plan, but other studies have projected much higher costs.

Kenneth Thorpe, a health policy professor at Emory University in Atlanta, authored one of the earlier studies and says the Mercatus analysis reinforces them.

“It’s showing that if you are going to go in this direction, it’s going to cost the federal government $2.5 trillion to $3 trillion a year in terms of spending,” said Thorpe. “Even though people don’t pay premiums, the tax increases are going to be enormous. There are going to be a lot of people who’ll pay more in taxes than they save on premiums.” Thorpe was a senior health policy adviser in the Clinton administration.

So go ahead and support higher taxes you millennials and watch your paychecks and bank accounts shrink not like they are gaining under Trump who has lowered taxes everywhere. People have more money in their paychecks because he lowered the FICA tax that comes out of your check every week. He lowered the business tax from 35 to 21% causing companies to hire and come back here from overseas causing a booming economy. He lowered the small business tax from 21 to 15% and the same thing is happening. We have a robust economy for the first time in 50 years. We wouldn’t have all that with higher taxes.

The Democratic position seems to be everything is going to be free. Free education. Free health care. Free housing. Free love.  I don’t know how they think we will pay for it.”

They say look at countries like Sweden and Great Britain and France where they have socialized medicine and the government pays for it. Well in those countries you have to wait six months to a year just to get an MRI and they don’t give senior citizens the operations they need because it is too expensive they say. Do you want to see that happen here?

At last week’s Democratic debate, Elizabeth Warren and Bernie Sanders along with the other Dems on the stage all raised their hands saying they support this scheme, er, I mean plan. Chuck Schumer and Nancy Pelosi have also said they support it too. While Trump is all about returning power to the people, the Dems are all about power to themselves over the people.

Beto O’Rourke and Corey Booker insulted all of America in the first Democrat debates of the 2020 campaign season – by blathering in Spanish on stage.

While they’re busy Hispandering for foreign votes, President Trump will continue speaking “blue collar American” to the voters who are cheering him on.

The Democrats are the most anti-American Party and has become the enemy of America. Socialism stinks and will not be able to make it in our Country. DEMOCRATS stress plainly LIARS and people are hopefully waking up to their hypocrisy.