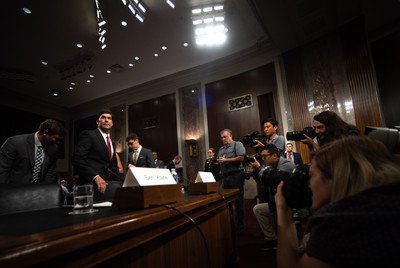 Army Secretary Dr. Mark T. Esper told senators that he would continue to prioritize training, modernization, building alliances and partnerships and reforming the Pentagon if he’s confirmed to serve as secretary of defense.

Esper, President Donald J. Trump’s nominee to assume the Pentagon’s top post, testified at his Senate Armed Services Committee confirmation hearing today. The committee will make a recommendation to the full Senate for its vote on whether to confirm Esper for the job.

In his opening statement, Esper noted the growing threats posed by great power competitors such as China and Russia and told the panel that these threats warrant a refocus to training, research and development, and equipping for high-intensity conflict, particularly in the space and cyber domains.

At the same time, he said, the military must be prepared to respond to regional threats posed by Iran, North Korea and terrorist groups around the world.

”Our adversaries must see diplomacy as their best option, because war with the United States will force them to bear enormous costs,” he said.

Besides warfighting priorities, Esper said he would place particular focus on the well-being of the men and women of the armed forces, along with their families. He mentioned housing, child care and spousal employment as important to the force’s readiness.

”Our military families are willing to make great sacrifices for their country, and in return, I am committed to ensuring they are cared for properly,” he said.

Esper would bring to the job a thick military resume that includes being a Pentagon war planner, serving for a decade on active duty in the Army, followed by 11 years in the Army National Guard and Army Reserve.

Our adversaries must see diplomacy as their best option, because war with the United States will force them to bear enormous costs.”

”I believe this broad and diverse experience has prepared me well for the position of secretary of defense,” he told lawmakers.

The senior team supporting the Office of the Secretary of Defense remains in place to ensure institutional continuity, Pentagon officials said.This includes David L. Norquist, the Defense Department’s comptroller and chief financial officer, who continues to perform the duties of the deputy secretary of defense.