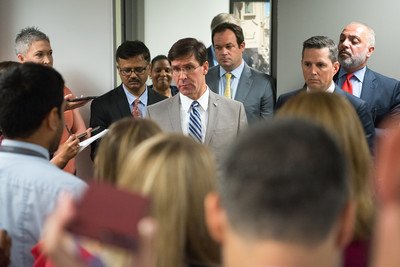 A top priority: Operation Sentinel, the U.S. Central Command effort to promote maritime stability, ensure safe passage, and de-escalate tensions in international waters throughout the Persian Gulf, the Strait of Hormuz, the Bab el-Mandeb strait and the Gulf of Oman.

The point of Operation Sentinel is to “de-escalate by deterring an escalation — any unnecessary provocation that leads to an unnecessary conflict,” Esper said. “[We’re] trying to de-escalate and at the same time message [Iran] very clearly, that without precondition, any time, any place, we’re willing to meet with them to talk about how we get back on into a negotiation.”

The secretary said that for now, the United States would work to make sure U.S.-flagged ships have safe passage over the waterways in the Middle East.

“To the degree that circumstances warrant that, if we think a U.S. ship may be under some type of threat — being stopped or being seized — we would want to make sure we have the capacity to make sure that doesn’t happen,” Esper said.

That may include overhead monitoring by unmanned aerial vehicles or could also mean having U.S. warships nearby, he said. “As long as you are in the area, that you can react quick enough to deter the provocation, that’s the key,” he added.

Esper said he’d be meeting with officials at Centcom and its Navy component to talk more about how Operation Sentinel will work. He emphasized that while de-escalation of conflict is a priority of Operation Sentinel, so too is ensuring safe and free navigation for U.S. ships in the region.

“My view is … we would want to prevent the Iranians seizing or stopping a ship, certainly, for any arbitrary reason whatsoever,” he said.

Turning to a new budget deal announced this week that allows $738 billion in funds for the U.S. military. Esper said he has “no complaints” with those numbers and the predictability the plan brings over two years without reliance on continuing resolutions. During his confirmation hearing before the Senate Armed Services Committee last week, Esper explained that a continuing resolution, among other things, prohibits starting of new programs and changes in production quantities and affects how the military departments are able to predictably fill training seats.

“It impacts everything we do across the board,” he said. “And in many cases, you can’t reclaim that ground. You can’t go back and fill a seat in a class. So it has a direct impact on training.”

The Defense Department has 59 positions that require Senate confirmation, and more than a dozen of those are now filled by people serving in an “acting” role. Esper said it’s critical for those positions to be filled with Senate-confirmed individuals.

“We need to get staffed up quickly,” he said, adding that he thinks there’s a commitment within Congress to fill the positions. “We have some other people [whose nominations] should be coming out of the White House soon. My key is to get those positions filled as quickly as possible and move people through the system.”