Posted by: Jim Garamone in In The News, Military and Defense, Syndicated Posts, US News July 16, 2019 Comments Off on Esper Nominated as Defense Secretary, Spencer Now Acting Secretary 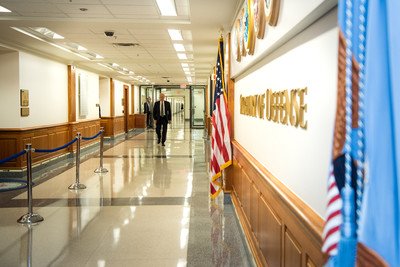 Navy Secretary Richard V. Spencer has become acting defense secretary, as the Senate has received the packet nominating Dr. Mark T. Esper to be the confirmed secretary of defense.

Eric Chewning, the chief of staff to the defense secretary, said the transition from Esper to Spencer went smoothly.

“There is only one secretary of defense, and that person is fully capable of defending the country and protecting the homeland,” Chewning said.

Esper was named acting defense secretary when Deputy Defense Secretary Patrick M. Shanahan stepped down from the position last month. President Donald J. Trump nominated Esper for the position — a move that requires Senate confirmation. By law, Esper cannot continue to serve as acting secretary while he is under consideration for the permanent job. He reverts to his position as the secretary of the Army.

The principals involved in this program met this morning to discuss how the transition would happen. This included Esper; Spencer; David L. Norquist, the undersecretary of defense who continues to perform the duties of the deputy defense secretary; Marine Corps Gen. Joe Dunford, the chairman of the Joint Chiefs of Staff; and Chewning.

When Spencer became acting secretary, he assumed the full authority and responsibility of the secretary of defense.

To ensure continuity, the team supporting the Office of the Secretary of Defense remains in place.

“We’ve been working closely with Senate leadership and the Senate Armed Services Committee, and we thank them for their efforts and commitments to swiftly consider top DOD leadership,” Chewning said.

DOD does not assume Esper’s confirmation, and Chewning was quick to point out that it is the Senate’s prerogative to take as long as it believes is necessary to examine and confirm the nominee. “Secretary Spencer is prepared to remain in the role until there is a Senate-confirmed secretary of defense,” he said.