CBS host Margaret Brennan repeatedly interrupted Wyoming Rep. Liz Cheney during a tense interview on “Face the Nation” on Sunday, but sat idly by when California Rep. Adam Schiff falsely claimed later in the show that President Trump is an unindicted co-conspirator in the investigation of Michael Cohen. 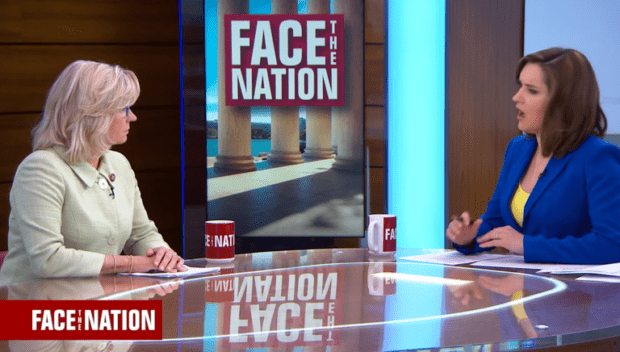 Brennan and Cheney battled over Trump’s remarks about four freshmen Democratic lawmakers known as “The Squad.” Trump tweeted last Sunday that the four Democrats, who are all women of color and American citizens, should “go back” to their home countries if they are unhappy with U.S. government policies.

Democrats have said that Trump’s remarks were racist, while Trump defenders have said that his comments had nothing to do with race and were instead a critique of their policy positions.

Cheney made the same argument, leading to a contentious exchange with Brennan.

The demeanor of the exchange was far different from Brennan’s interview with Schiff, even when the House Intelligence Committee chairman falsely claimed that Trump is an unindicted co-conspirator of Cohen’s.

Cohen pleaded guilty on Aug. 21, 2018 to a series of crimes, including tax evasion, bank fraud and making an illegal campaign contribution in the form of a $130,000 hush money payment to Stormy Daniels.

Prosecutors referred to Trump as “Individual-1” in Cohen’s court filings, but he was never accused of conspiring with Cohen to break the law by paying off Daniels. In his plea agreement, Cohen admitted to paying Daniels “in coordination with and at the direction of” Trump.

When Brennan asked Schiff about his past predictions that Trump would be indicted as part of the investigation, the lawmaker said that he believes that Trump was not indicted because of Justice Department policies against indicting a sitting president.

He also asserted that Trump was an unindicted co-conspirator.

“I mean, it’s been clear, you know, from Bob Mueller that he felt and the Justice Department feels bound by this Office of Legal Counsel opinion that you can’t indict a sitting president. But he is a- essentially unindicted co-conspirator,” said Schiff.

“He’s been identified as an Individual One, as the person who directed Michael Cohen to commit this fraudulent campaign scheme. And I assume that all this means, in terms of the Southern District of New York, is that the case will be reopened when he leaves office, providing the statute of limitations has not run, and the Justice Department will have to weigh whether to indict the former president.”

Schiff’s claim is inaccurate, though Brennan did not interrupt to mention it.

As USA Today editor Brad Heath noted on Twitter on Thursday, Trump is not an unindicted co-conspirator in the Cohen investigation because the former Trump fixer was never charged with a conspiracy related to his payments to Daniels.

“Guys, President Trump was not an ‘unindicted co-conspirator’ in the criminal case against his former lawyer, Michael Cohen. The Justice Department didn’t charge Cohen with conspiracy, so it didn’t allege that he had co-conspirators, indicted or otherwise,” Heath wrote.

Constitutional law professor Alan Dershowitz made a similar point in a Washington Examiner column on Sep. 13, 2018.

“Before this claim is repeated so often that people assume it is true, let me state categorically that Trump is not an unindicted co-conspirator and that it is wrong to characterize him as such,” Dershowitz wrote.

“So unless there is a secret indictment against Cohen, accusing Trump of being his co-conspirator, Trump cannot be an unindicted co-conspirator.”

Support Conservative Daily News with a small donation via Paypal or credit card that will go towards supporting the news and commentary you've come to appreciate.
Tags
Face the Nation Liz Cheney Margaret Brennan media bias