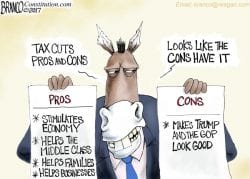 Wouldn’t one have to conclude Democrats haven’t had an original idea in decades? Can we hope their ‘tax & spend’ ideologies finally died since President Trump? For sure, their charges of ‘racist’ and “homophobe” are no longer resonating – even within their own Antifa and KKK offices!

Finally, doesn’t it appear the American public is catching on to their dirty tricks? It’s become so easy to confirm whatever the Democrats complain about because they are doing it!

Remember their reaction when the Attorney General used the word “spying?” Their heads exploded!  Today, we are learning that’s exactly what Democrats do!

Consider their support of Planned Parenthood – their primary choice to eradicate the Black race through abortion mills. Yes, a very sick but primary role for today’s Democrats. If anyone attacks a non-conservative Black, Democrats proudly defend them, and you are a racist.

However, if you want to see an angry Democrat, just ask them why they support exterminating Black babies, Black on Black crime, and Father’s absent from Black children’s home! Nothing but crickets on those critical issues! Is that convenient or intentional?

Yes, no matter one’s political persuasions, please find just one positive thing Democrats do to improve the lives of Americans. Give up? Well, don’t feel like the Lone Ranger!

Try contacting Democrat Representatives to ask this simple question, “What are the Democrats doing for America, today?” All you’ll hear is a bunch of stuttering!

Without exception, their primary attention is only on impeaching the President – as if that’s a positive. Of course, when the only natural follow up question is asked, they hang up. They don’t want to debate what President Trump is doing for all Americans!

It’s so difficult for anyone with common sense to understand the Democrat’s total madness and hatred for President Trump and America. Democrats have never been as disconnected from the rest of the world as they are today.

No matter the country, we are seeing revolutions against socialism and return to citizen rule using capitalism. Democrats don’t see it and falsely believe America wants Socialism.

Democrats only fixate on two priorities: 1) Money, and 2) Power – the two primary ingredients in Socialism. Yes, America and its citizenry be damned.

If Congress continues to allow politicians to be bought by nefarious sorts like George Soros, Google, Twitter, Facebook, Amazon, Starbucks, Al Gore, and the rest of the elite sycophants, America is only going to get more corrupted. Being able to buy politicians is a Republican and Democrat Party problem.

Well, Democrats proudly proclaim this to be a true statement. What do Republicans say about this? It’s crickets, right?

To bring Democrats back into the real world, shouldn’t Republicans set the example by demanding Congressional members begin acting like the people’s servants – not dictating royalty? Next, one simple change in Congress could stop 99% of the corruption by limiting committee chairmanships to two years!

Another idea that doesn’t receive daylight is making sure every Congressional member reads and understands the US Constitution! Don’t believe Democrats would be favor of any idea to limit their power, but couldn’t Republicans force accountability upon all office holders to ensure they live up to their oath of office or be expelled from Congress?

Maybe there are other and better ways to get Congress back to doing the “people’s work.” Why not have that debate? Regardless, any step forward is what is needed. The question is whether anyone in Congress has the spine to take such bold steps, right?

What Congress is doing today, isn’t working and serves to only waste valuable taxpayer money while fattening their wallets. Many in Congress must be expelled or criminally charged for failing to uphold their Constitutional duties and responsibilities to be good overseers of public funds.

If not, how will the cycles of corruption ever be exposed and stopped? How will anyone get Democrats to focus on doing the people’s work instead of just yapping like jackasses? Doesn’t America deserve much better from our elected officials?

Support Conservative Daily News with a small donation via Paypal or credit card that will go towards supporting the news and commentary you've come to appreciate.
Tags
Congress