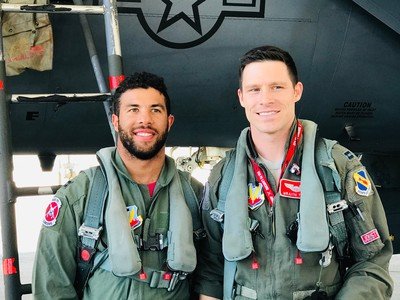 Going fast is clearly a passion for NASCAR driver Darrell “Bubba” Wallace Jr. But 500 mph in a fighter jet? That’s a little faster than what he’s used to.

“We’ve got to find some speed in our car to match this speed,” Wallace said after visiting Seymour Johnson Air Force Base in North Carolina to test out the adrenaline rush from an F-15E Strike Eagle. The visit was a second take, of sorts, for him. He was supposed to fly on the jet last year but was ill, so he had to watch from the sidelines.

This year, he was ready for the challenge.

“I’m whooped. I’m three for three and haven’t thrown up or passed out,” Wallace said, referencing this flight and two F-16 flights he’s had in the past, “but this flight has kicked my butt.”

Wallace’s visit is part of the Defense Department-supported NASCAR Coca-Cola 600 Salute to Troops that happens annually over the Memorial Day weekend. Wallace is one of five drivers who will be racing in honor of fallen service members.

At the air base, No. 43 got the necessary physical required to fly before heading over to the 333rd Fighter Squadron, where he met Air Force Capt. John “Wraith” Tilton and was fitted for a flight helmet, mask and flight suit. Then he got what’s called a step brief by the aircrew, who filled him in on basic facts about the jet and what to expect. They showed him a map of the airspace and answered any questions he had.

Next up, Wallace joined the flight crew for one final brief on weather conditions, runway clearances, routes, airspace and other procedures. He and Wraith then climbed into the F-15, checked all systems and equipment one last time, and they were off!

“It was boring — one of the worst experiences ever,” Wallace joked after his hour-and-a-half flight. “I enjoyed the hell out of it!”

Wallace did a few interviews and signed hats for the squadron before exchanging NASCAR and Air Force flags with the crew and giving them tickets to the big race. He was proud to have met them.

“I always heard growing up [about people] getting deployed or being in the military, and I thought, ‘Oh, OK, you go over and defend our country.’ Well, there’s so much more than that,” Wallace said. “Being able to see different perspectives and occupations inside the field here is always incredible. … I can’t thank each and every one of these airmen enough.”

So, what was Wallace’s favorite part of the experience? The break room’s jalapeno popcorn. He even remembered it from the year before.

“It’s the real reason I came, let’s be honest,” he joked.

‘Frightening’: Devin Nunes Says FBI Informant ‘Made Up A Bunch Of Lies’ About Michael Flynn