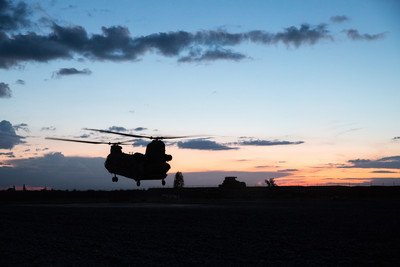 There’s no question that Russia has a presence in the Middle East — in particular, in Syria — the assistant secretary of defense for international security affairs said during a forum hosted by the Atlantic Council in Washington.

Russia’s also working with Turkey and Iran and would like to do more, Kathryn Wheelbarger told the audience at the trans-Atlanticism-focused think tank’s headquarters yesterday. But its capability to project forces is limited, she said, and when it does, its track record as a partner makes it a less-than-desirable suitor.

“Russia’s ambitions and its success … should not imply that Russia does not face its own challenges operating abroad,” Wheelbarger said.

“Its military, while growing and modernizing in some areas, has significant limitations,” she noted. “Years of neglect have atrophied much of its force-projection capabilities. Indeed, it has very limited military commitments in the Middle East at all. Even its force projection into the eastern Mediterranean, which is a complicating development for us, for sure, highlighted Russia’s logistical and capacity challenges when attempting to maneuver in different spheres.”

The U.S presence in the Middle East differs greatly from Russia’s, she said.

“The United States maintains tens of thousands of troops in the region, including [the] headquarters of our 5th Fleet, and a U.S. presence at numerous bases in the region, where we augment partner capacity and facilitate their defense,” Wheelbarger said.

When it comes to foreign military sales of weapons systems to partner nations, the U.S. and Russia differ greatly as well, she said. When the U.S. sells weapons to partner countries, they get not only new equipment, they get an ongoing commitment from a strong, proven partner.

“Unlike the relationship with the United States, [Russia’s] military sales do not come with long-term commitments of maintenance, sustainment and interoperability that the U.S. routinely provides,” Wheelbarger said. “Russia is a transactional partner seeking its own benefit. It thrives in chaos, and therefore does not seek the best interests of its transactional partners. Any regime that thrives on chaos cannot be trusted to strive for stability.”

Wheelbarger said the U.S. interest in the Middle East continues. Even as the National Defense Strategy puts emphasis on China and Russia, Wheelbarger joined a number of other defense officials who have said that emphasis also includes the Middle East. The U.S. values its partnerships in the Middle East, she said, and wants to continue those relationships and strengthen them, for both its own interests and for those of what are considered true partners in the region.

“We don’t see these as ‘client states’ that we are just working with transactionally,” Wheelbarger said. “It’s a challenge, because the region is so volatile, and there are so many different centers of power. Our image is really to try to build our security architecture with those countries that we can work with, that over time, they work successfully together to shore up their own defenses, and see that cooperation with each other is better than fighting with each other.”

She asked Middle Eastern partner nations to recognize the difference between a U.S. commitment in the region and a Russian one.

“We urge them to see that Russia remains an unreliable partner,” Wheelbarger said. “By striving to accommodate all sides in regional disputes, Russia shows it can’t be trusted when true choices need to be made and friends need to be known.”