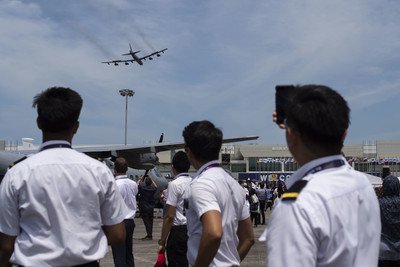 For decades, the United States has led the world in efforts to reduce the number of nuclear weapons, the deputy undersecretary of defense for policy said at a hearing of the Senate Committee on Foreign Relations on the current state of arms control efforts.

The U.S. is committed to its long-held arms control, nonproliferation, and nuclear security objectives, he said, particularly its commitment to the goals of the Treaty on the Non-Proliferation of Nuclear Weapons.

Unfortunately, Trachtenberg said, Russia and China have chosen a different path and have increased the role of nuclear weapons in their strategies and actively increased the size and sophistication of their nuclear forces.

The Intermediate-Range Nuclear Forces Treaty, or INF, was once a cornerstone of security in Europe, he told the committee. By removing an entire class of weapons from the arsenals of the United States and the Soviet Union — and subsequently Russia and other Soviet successor states — Europe and much of the world enjoyed increased security, Trachtenberg said.

But, he said, the INF treaty no longer provides that security when Russia intentionally and blatantly breaches it by producing and testing missile systems that are in open violation.

As a result, the U.S. has suspended its obligations under the treaty and has given notice of intent to withdraw from the treaty unless Russia returns to full and verifiable compliance, Trachtenberg said. Allied nations have said they fully support this U.S. decision.

The New Strategic Arms Reduction Treaty was signed by Russia and the U.S. on April 8, 2010. This treaty involves a reduction in the number of strategic nuclear missile launchers and a more robust inspection and verification process.

While the U.S. assesses Russia to be in compliance with the central limits of New START, Trachtenberg said “the outlook of Russia’s arms control behavior is sobering.” Besides violating the INF Treaty, it has violated:

In addition, he said, Russia is selectively implementing the Vienna Document and has acted inconsistently with the Presidential Nuclear Initiatives.

Moreover, Russia is modernizing its growing and increasingly capable arsenal of shorter-range, nonstrategic nuclear weapons, which Trachtenberg noted are not covered by New START.

That said, DOD supports pursuing a prudent arms control agenda, he said, which could include extending New START — provided the outcomes improve the security of the U.S., allies and partners.

The U.S. remains committed to meaningful arms control that decreases the chances of misperception and miscalculation that can lead to conflict, Trachtenberg said. Arms control agreements are not something the U.S. signs for the sake of arms control, he told the senators; it signs them to increase its national security.

Support Conservative Daily News with a small donation via Paypal or credit card that will go towards supporting the news and commentary you've come to appreciate.
David VergunMay 15, 2019
Facebook Twitter Reddit Telegram Share via Email Print