Posted by: Jim Garamone in In The News, Military and Defense, Syndicated Posts, US News May 1, 2019 Comments Off on Pentagon Leaders Urge Quick Defense Budget Approval to Sustain Momentum 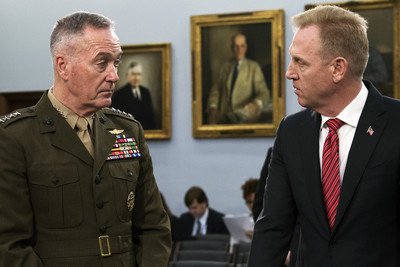 Acting Defense Secretary Patrick M. Shanahan thanked the House Appropriations defense subcommittee for its work last year to pass the DOD budget on time, and asked them to duplicate the feat so the department doesn’t lose momentum.

“The strategy you supported last year is the same strategy we are asking you to fund this year,” Shanahan said. “The $750 billion topline for national defense enables DOD to maintain irregular warfare as a core competency, yet prioritizes modernization and readiness to compete, deter and win in a high-end fight of the future.”

Dunford assured the panel that the U.S. military “can deter a nuclear attack, defend the homeland, meet our alliance commitments and effectively respond should deterrence fail.”

America’s military still maintains a competitive edge against any potential adversary, and the United States still has the ability to protect power and sustain that effort. But, “17 years of continuous combat and fiscal instability have affected our readiness and eroded our competitive advantage,” the general said.

China and Russia capitalized on America’s involvement in Afghanistan and Iraq and invested in capabilities that seek to destroy the U.S. military’s source of strength. “After careful study, they have developed capabilities intended to contest our freedom of movement across all domains and disrupt our ability to project power,” Dunford said.

This budget is critical for the continued execution of our strategy, and it reflects difficult — but necessary — decisions that align finite resources with our strategic priorities.”

In 2017, Congress passed budgets that provided funds to restore the military’s competitive advantage. “Recent budgets have allowed us to build readiness and invest in new capabilities while meeting our current operational requirements,” he said.

The fiscal year 2020 budget request is critical to maintaining that momentum, Shanahan said. “This budget is critical for the continued execution of our strategy, and it reflects difficult — but necessary — decisions that align finite resources with our strategic priorities,” he said.

It also looks to the future with record amounts dedicated to research, development, testing and evaluation, and monies to look at space and cyber capabilities. The budget also continues America’s modernization of the nuclear triad — the cornerstone of deterrence and peace.

The budget asks for an increase in end-strength by roughly 7,700 service members and provides a 3.1% pay increase.

This needs to continue and the Budget Control Act — which involved sequestration — still looms. “As this committee fully understands, no enemy in the field has done more damage to our military’s combat readiness in years past than sequestration and budgetary instability,” Shanahan said. “And there is no question today: Our adversaries are not relenting. In short, we cannot implement the [National Defense Strategy] at sequestration levels.”

Sequestration would halt progress in rebuilding readiness, growing the military and modernizing. It would stop investments in technologies like artificial intelligence, hypersonics and critical modernization efforts.

A continuing resolution would also hamstring the Defense Department.

Dunford said it will take years to restore readiness sequestration blighted. “This year’s budget submission will allow us to continue restoring our competitive advantage by improving readiness and developing capabilities to enhance our lethality,” he said. “It proposes investments in advanced capabilities across all domains sea, air, land, space and cyberspace.”

DOD has taken steps to more effectively employ the American military today and build the force of the future. “We have implemented fundamental changes in our global force management process to prioritize and allocate resources in accordance with the National Defense Strategy,” Dunford said. “We do all of this while building readiness and the flexibility to respond to unforeseen contingencies, and … I can assure you that as we have made these adjustments to our global force management posture we are also addressing the sustained requirement against violent extremism.”

Tagged with: defense budget the Department of Defense