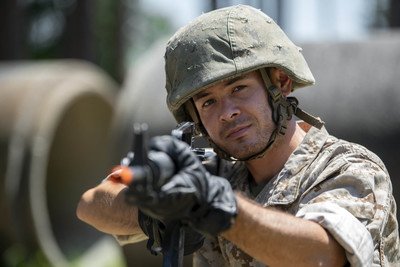 “Starting now, you will live, eat, sleep and train as a team. The words ‘I, me and my’ will no longer be a part of your vocabulary!”

Those words were some of the first that NASCAR driver Kyle Larson heard as he stepped off the bus at Marine Corps Recruit Depot Parris Island, South Carolina. No. 42 got an earful from a drill instructor as he visited the training area to learn the ropes of being a Marine ahead of the annual Coca-Cola 600 race’s Salute to the Troops.

After that stern introduction, Larson and three people from his team changed into standard Marine desert camouflage and were then tasked with calling home to say they’d arrived safely. The instructions to do so are very specific — there’s a script on the phone and everything.

Next, however, was the fun part: rappelling down a 47-foot tower, which just happens to be one of the smallest the Marine Corps has.

“Going down the wall was awesome,” Larson said. “I just tried to do it as quick as I could before I got nervous.”

Larson and his team then got to field train, including traversing culverts, crawling on the ground and climbing over obstacles to practice their teamwork.

“Seeing the respect that everybody has here for one another is awesome. They’re one big team, which is similar to us,” he said.

Shooting some rifles was on the agenda, too, before Larson signed a Marine Corps and a Coca-Cola 600 flag and then handed out hats and tickets for the big race to Marines.

Larson will be racing in honor of Sgt. Jeannette Winters, the first female Marine to die in a combat zone. The 25-year-old died Jan. 9, 2002, when a KC-130R refueling tanker aircraft crashed in Pakistan while she was deployed in support of Operation Enduring Freedom.

“After coming here and getting to see what she’d gone through to become a Marine, getting to honor her with her name on our car will be really special,” Larson said.

He said in just a few hours at Parris Island, his respect for the branch expanded a lot.

“I didn’t know what exactly to expect coming here, so everything was very new and a really cool experience,” Larson said. “I can’t say thanks enough for what they do for us as Americans, as well as showing us great hospitality today. … I’d be extremely nervous if I was any of them, coming here. I think this place would help any 18-year-old grow up quickly.”

The Coca-Cola 600, which is run annually over Memorial Day weekend, salutes military heroes. Check Defense.gov for more stories on how four other NASCAR drivers made out ahead of their plans to honor the four other service branches.