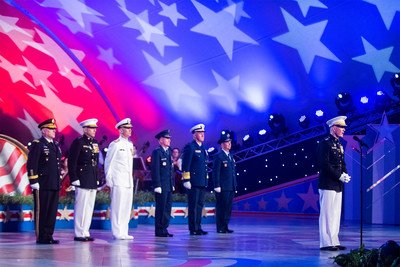 Memorial Day is the day that makes possible all other days of the American republic, Vice President Mike Pence said at Arlington National Cemetery in Virginia.

“Without it and the patriots we honor … there would be no other American days,” he said.

Pence spoke today following a wreath-laying ceremony at the Tomb of the Unknown Soldier. Arlington National Cemetery, with more than 400,000 graves, is the epicenter of America’s remembrance.

The vice president told those gathered at the cemetery’s Memorial Amphitheater, that the nation has been blessed by the service of Americans of all walks of life who stepped forward in the country’s hours of need. “The unbroken chord of military services stretches into the mists of American history: From Bunker Hill to Belleau Wood, from San Juan Hill to Saipan, from the Coral Sea to Kandahar,” he said. “Heroic Americans have answered their country’s call, and paid the ultimate price for our freedom. Their duty was to serve. Our duty is to remember.”

Marine Corps Gen. Joe Dunford, chairman of the Joint Chiefs of Staff, said Americans must honor those who gave the last full measure to the nation and should “reflect on the values and high ideals for which we stand.”

Dunford also asked Americans to remember that the United States is a country worth fighting for.

“The story of those remembered today is one of extraordinary sacrifice, it’s a story of lives cut short, of hopes and dreams never realized,” the general said. “It’s also a story of sacrifice for the families left behind: the anguish of parents, spouses, children, siblings and friends; the sadness of the empty seat at the family table.”

The vice president, Acting Defense Secretary Patrick M. Shanahan and Dunford all stressed that Americans should resolve to be worthy of such sacrifices. Dunford called on Americans to “resolve to strengthen our personal commitment to the values that they stood for and resolve to make a difference in our nation and communities. If we do that, those who were taken from us prematurely will be able to look down and know we truly remember them.”