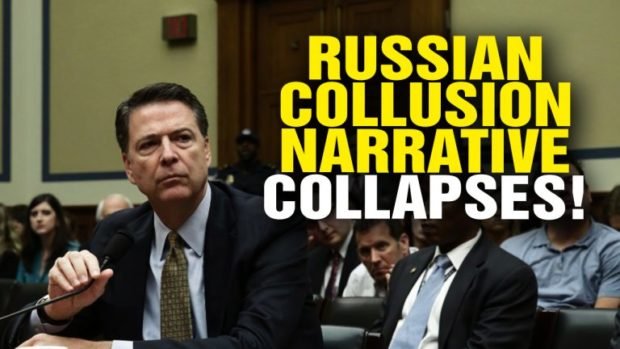 After two years and 30 million dollars,2800 subpoenas,500 witnesses interviewed 19 lawyers and 40 FBI agents, Mueller’s report showed no collusion and no obstruction by Trump. Now to go after the real guilty parties Comey, Brennan, Clapper, Strzuk, Page and Loretta Lynch and of course the chief ring leader Hillary. At a hastily arranged Wednesday press conference, Special Counsel Robert Mueller proved that he was never interested in justice or the rule of law. At the nine-minute press conference, he took no questions from reporters and insinuated that “we can’t prove that the president didn’t commit a crime.”

“If we had had confidence that he clearly did not commit a crime we would have said so,” Mueller said, implicitly refuting Trump’s repeated statements that Mueller had exonerated him. “We did not, however, make a determination to whether the president did commit a crime.”

The special counsel made it clear that he felt constrained from the beginning of his probe by Justice Department rules that prohibit the indictment of a sitting president. The method for charging and removing a president, he said, lies outside the criminal justice system, referring to the Constitution’s provisions for impeaching and convicting a president.

Under longstanding Department of Justice policy, Mueller said, “a president cannot be charged with a federal crime while he is in office.”

“That is unconstitutional,” Mueller said. “Charging the president with a crime was therefore not an option we could consider.”

Mueller said this because he knew the Dems were unhappy with his report and he wanted to push the envelope on collusion which he tried to do but couldn’t. This gave rise to the Dems’ hysteria and impeachment fantasies.

Rush Limbaugh summed it up pretty clearly on his radio show today saying, “So, now we know the evidence is clear, the evidence is in. What we have suspected all along is the case. The special counsel, Robert Mueller, wanted to nail President Trump and still wants to nail President Trump. There is no difference between Robert Mueller and any Democrat or member of the media in that town.

The only problem that Robert Mueller had was there isn’t any evidence to nail the president, and so he is attempting to imply that the president committed all kinds of crimes, but, in the end, Robert Mueller says Department of Justice guidelines prevent us from indicting the president; it would be constitutional, and so we can’t do it.

Mr. Mueller, if that’s true — and that’s not what Attorney General Barr says that you told him, by the way, and there’s a lot of other people in the Department of Justice who say that those guidelines had nothing to do with you and your report on your decision not to charge crimes where the obstruction was concerned.

If all of that is true, then why do this investigation in the first place?  Because the only reason for it was to get Donald Trump. It wasn’t to find whether or not the Russians had colluded because everybody knew that. There never has been any evidence that Trump colluded. All there ever was that dossier.

But Robert Mueller made it clear as a bell today that he wants to nail Donald Trump and he wants Donald Trump out of office, he just doesn’t have the evidence. And so he’s asked Congress to take over the job.

Rush is right. Mueller just proved his entire operation was a political hit job that trampled the rule Of law.

This whole Russian collusion hoax was all because they lost an election and hated Trump. They tried to get Trump out of the way and exonerating Hillary (who by the way committed multiple crimes and should be in jail) and the phony dossier was supposed to do that, but failed.

The media still can’t let this go and still hope for impeachment, but this will all come to blow up in their collective faces when the avalanche of declassified documents showing abuse of power by Obama and Hillary and the corrupt top echelon of the FBI, CIA and DOJ is exposed. This will be political suicide for all of them.

According to Fox News host Sean Hannity, the “deep state” is in full panic mode.

This comes after President Trump authorized Attorney General William Barr to declassify information regarding the origins of the Russian probe last week.

On his show, Hannity had a warning for those involved in the Russia investigation, especially former FBI director James Comey, who wrote a critical op-ed in the Washington Post.

“Jim Comey, you do have the right to remain silent,” Hannity said. “You should have taken my advice from the get-go.”

Hannity is claiming otherwise and included other Obama-era intelligence officials such as former director of national intelligence James Clapper and former CIA director John Brennan.Both of whom have been vocal against Trump authorizing declassified information in the Russian probe.

Meanwhile there is plenty of evidence to suggest that Trump is heading towards an easy win in 2020 and the Democrats are only helping him. The economy, the horrible candidates, and the lowbrow tactics Democrats in Congress, the fact that they have nothing to offer except higher taxes and their ridiculous Green New Deal are all things that are contributing to what very well may be a Trump landslide in 2020. While this is good to know, we have to be careful not to get too complacent and not show up to vote. Remember in 2016 all the polls on election night showed Hillary winning and she lost. We must not let the opposite happen here. Here is the evidence that Trump shows a Trump LANDSLIDE in 2020:

1) The chief economist at Moody’s Analytics Mark Zandi has looked over 12 economic models and all show that Trump wins in all of them.

3)Democrat infighting-Democrats are tearing each other down in the massive primary that is taking place for the 2020 election. Figures like Joe Biden and Bernie Sanders can’t seem to agree on any one issue other than the fact that they don’t like Trump. Independent journalist Tim Pool has predicted that voters simply will not vote if the candidate they do not like gets the nomination, he pointed to the ever-increasing difference in policy as evidence for his prediction.

4) A strong economy-The economy is doing great currently and the momentum is still there, although the trade war with China is ongoing it is likely to end soon as the Chinese markets are taking a lot more damage than ours. As long as the economy stays strong and Trump continues to deregulate small business and the oil industry he may as well be declared the winner.

5) Democrats moving further left-According to the PEW research center, the Democrats have gone further to the left in recent years leaving moderates behind. While the right has also moved to the right the left has moved way further away. This drastic shift will leave moderates in the dust and they are likely to end up voting for Republicans in the near future. As Ronald Reagan said, “I didn’t leave the Democratic party, the Democratic Party left me.”.

Support Conservative Daily News with a small donation via Paypal or credit card that will go towards supporting the news and commentary you've come to appreciate.
Tags
Spygate