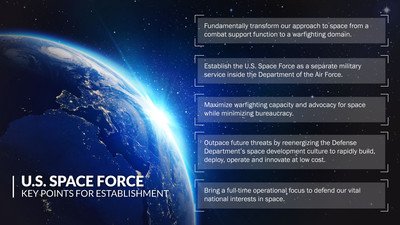 Though there once may have been tranquility in space, that’s likely no longer the case, Acting Defense Secretary Patrick M. Shanahan told the 35th Space Symposium in Colorado Springs, Colorado.

“We’re in an era of great power competition, and the next major conflict may be won or lost in space,” Shanahan said. “Space is no longer a sanctuary — it is now a warfighting domain.”

The secretary told U.S. military and defense industry space experts that the Defense Department is embarking on a massive effort to ensure the United States maintains its dominance in space amid competitors’ challenges to that dominance.

In addition to the proposed U.S. Space Force, the effort includes a new joint combatant command, — U.S. Space Command — and the Space Development Agency, which will ensure those fighting to maintain space dominance always have the best gear.

Shanahan said the Space Development Agency is expected to do three things for the U.S. military: