During the 1960s, a radical author named Saul Alinsky wrote a book called “Rules for Radicals” that outlined 10 uncanny and evil rules for radicals to follow to win an election. One of those rules said ‘Find a target, isolate it, freeze it and destroy it.’ Another said ‘Blame others for your faults.’ Both of these were used against Trump in this last election. Hillary was a big follower of Alinsky and even wrote her college thesis on him.

For the past two years now ever since Hillary lost the Democrats and her campaign have been subjecting and maliciously maligning Trump and his family and the entire nation on this false narrative and hoax that he colluded with Russia to win the election with the hopes of overthrowing him in a soft coup.  Alinsky rule #1,find a target, isolate it, freeze it and destroy it. The entire democrat party was so triggered by her lost after she was supposed to win one hundred million to one, according to FBI agent Peter Strzuk, that they have turned into raving lunatics like a machine destroying anything in its’ path, the hell with the country.

Meanwhile, it was Hillary and the DNC who paid foreign British spy Christopher Steele one million dollars laundered thru opposition information group Fusion GPS to write a sleazy fake dossier on Trump saying he was in Russia, visited with Putin and liked watching Russian prostitutes urinating on his bed even though nothing could be verified. They used this dossier with no proof to get a FISA warrant to bug Trump’s aid’s phone. This was Watergate on Steroids.

It was Hillary who signed off on selling 20% of our uranium to Russia for $145 million dollars to her corrupt foundation. For those who may not know uranium is used to make nukes as well as used in medical equipment. It was Bill who met with Putin discussing this transaction and it was Bill who doubled his speaking fee to $500,000 for a half hour speech in Russia. 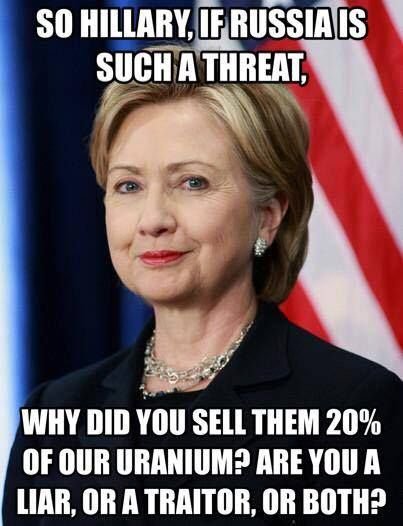 Now that the Mueller report has found no collusion or obstruction by Trump just as Trump always has been saying the demes are triggered even more going after his taxes which noone even cares about and insisting there is obstruction somewhere and calling for his impeachment.

In spite of all this nonsense Trump is continuing to succeed with over 200 accomplishments in two years more than all the presidents put together. More than half the nation’s fine with Trump in spite of 92% daily negative reporting by the destroy Trump media. More people are working than ever before, unemployment is at 3.8% the lowest in 50 years, companies are coming back here to build in droves from overseas, people have more money in their paychecks thanks to him lowering the FICA tax, he’s given us the largest tax cut in history and not just for the rich either by doubling the standard deduction to $12,000 for a single person and $25,000 for a married couple. And the list goes on and on with everyone doing better under Trump. Oil prices have come down because he opened the Dakota and Keystone pipelines and drilling in ANWAR so we are energy independent for the first time in 60 years. Yet he media and dems want to destroy all that all because they lost in 2016.

Here’s another thing that needs to be put out there. How does every left wing news media with all their investigative reporters come up with the exact same story and the exact same words to call it every day. That is collusion.

Trump is a counter puncher and now that it was proven that there was no collusion on his part the gloves are coming off. Trump criticized the Obama administration on Twitter Thursday for only choosing to address their concerns only after the election was over—for what seemed to be purely partisan reasons intended to undermine his legitimacy.

Anything the Russians did concerning the 2016 Election was done while Obama was President. He was told about it and did nothing! Most importantly, the vote was not affected.

Obama was made aware of Russia’s efforts but did little to stop the interference. He reportedly warned Russian President Vladimir Putin against involvement in U.S. affairs, but didn’t take public action for fear of stoking partisan flames during the election.

Obama warned Putin at a G-20 meeting in China “to cut it out, there were going to be serious consequences if he did not.”

Obama said he downplayed Russia’s actions because he didn’t want it to appear that he was trying to help Hillary Clinton beat Trump.

He did impose sanctions on Russia for the election interference. However, in the aftermath of the election he expelled several Russian diplomats. That move prompted Trump’s would-be national security adviser, Michael Flynn, to meet with the Russians in order to cool tensions.

The partisan Obama appointees in the Justice Department, however, used that meeting as a pretense to invoke the Logan Act and launch an investigation into Flynn that led to his indictment for lying to the FBI.

“I think the [Obama] administration needed to call out Russia earlier, needed to act to deter and punish Russia earlier,” said Schiff, then the ranking member of the Intelligence Committee said in 2017.