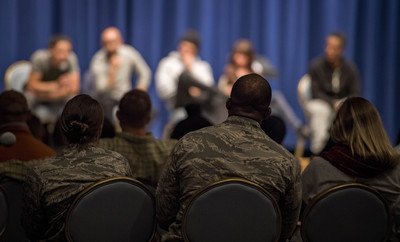 Actors do some crazy things for their jobs, but it’s not every day they choose to put on a padded dog bite sleeve and get attacked by a military working dog with 300 pounds of pressure behind its bite.

A few actors recently watched some drug-sniffing dogs in action at the 2nd Military Working Dog Detachment at Fort Meade, Maryland. They learned all about their extensive training and discipline for missions such as seeking out improvised explosive devices when the dogs are deployed to Afghanistan. Axa, a 7-year-old Belgian Tervuren, ran through the detachment’s obstacle course and repeatedly, on command, attacked whoever chose to step into the dog bite sleeve and jacket.

The visitors were impressed.

”I’m lucky if we’re able to get our dogs to sit,” joked actor Reed Birney, who notably played the vice president in ”House of Cards.”

”I guess I’d been aware that dogs are deployed overseas to smell bombs and things like that, but I’ve never seen it this close,” Birney said. ”To see the guys with their dogs and the devotion and the care and the training is fascinating.”

Birney and actors Annie Golden and Noah Bean visited the post as part of Arts in the Armed Forces, a nonprofit organization founded by ”Star Wars” actor Adam Driver — a Marine Corps veteran himself — to help bridge the military-civilian divide. During Arts in the Armed Forces excursions, which include overseas installations, the actors get to see what military life is like, then perform for the installation’s service members, veterans, military support staff and their families.

Golden, who plays Norma Romano in ”Orange Is the New Black,” said her favorite part of the trips is the question-and-answer session with military members after their performances. Her father served in World War II, and she has a nephew who served in the Marine Corps, so she understands some of the struggles service members and their families go through.

”[My nephew] went to the Philippines for the recovery, rescue and cleanup after the earthquakes [in 2013]. There were four Marines who had gone down in a helicopter and were missing for a weekend, and we were beside ourselves. So, it’s very real to me, the sacrifice,” Golden said.

The group was incredibly thankful to get such an up-close look at a part of American life that they don’t often see.

”To be able to come and actually be with active service members and to get to know more intimately what they’re doing and how they’re doing it, and how proficient and incredible they are, I think it’s rewarding as a citizen … and important to have human interaction with the people who are responsible for our safety,” Bean said.