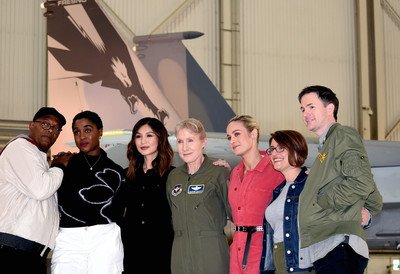 About 50 airmen from the Fresno-based 144th Fighter Wing of the California Air National Guard and the 412th Test Wing from Edwards Air Force Base, California, had roles as extras for the film. B-1 and B-2 bombers; F-16, F-22 and F-35 fighter jets; and a NASA Global Hawk unmanned aircraft, as well as housing, runways, the flighline and a hangar at Edwards were used in the f. About 490 cast and crew members with 37 trucks spent about 21 days on the base for setup, filming and tear-down.

“I learned how to dogfight on offense and defense. I pulled 6.5 G’s. I can’t wait to get up in a plane and pull more, because I’ve got to get up to nine,” Larson said. “Getting to research this role at Nellis Air Force Base and the level of loyalty, commitment, respect and humor I felt at that base, I took with me and brought to the set.”

Larson said it was exciting to hear Leavitt’s accounts of her groundbreaking accomplishments, and that she hopes girls who see the film will  see that they, too, can fly.

Leavitt, now the commander of Air Force Recruiting Service at Joint Base San Antonio-Randolph, Texas, said Larson spent a lot of time to understand what it’s like to be a female fighter pilot in the Air Force. “She talked with a number of our female fighter pilots and wanted to get the details correct,” the general said. “I really respected how seriously she took this role.”

Daylight Saving Time Was Once Known As 'War Time'

Nearly Half Of The Country’s Biggest School Districts Are Open For In-Person Learning: Survey

Rush Limbaugh Is A ‘Leading Member Of The National Hall Of Shame,’ ‘Art Of The Deal’ Co-Author Says