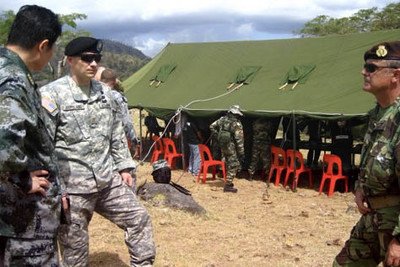 A lot of Defense Department decisions tie in with State Department foreign policy. But while military advisors and diplomats share the same mission, they have very different perspectives and skill sets. So it would make sense to have a link between the two, right?

That’s where the Bureau of Political-Military Affairs’ Office of State-Defense Integration comes in. It creates a link between DOD and State by supplying State with military advisors and DOD with foreign policy advisors, much like they’re exchange students. It better prepares America to respond to emerging threats and advance U.S. national security interests more effectively.

Nearly 100 military advisors from the DOD are assigned to 25 State bureaus and offices, where they offer senior officials their military expertise and advice on topics that include operations and exercises, post-conflict reconstruction, arms control, counterterrorism and military law.

On the flip side, State sends the DOD about the same number of foreign policy advisors to combatant commands, task forces and special operations units all over the world. These diplomats supply our generals and admirals with foreign policy expertise on international relationships, how to engage with certain leaders, planning of exercises and operations, and more.

Many of the military advisors involved in the program say the role has given them new perspective.

“The level of interaction across the U.S. government is amazing,” said Army Lt. Col. Rex Copeland, the senior foreign military advisor to the Bureau of East Asian and Pacific Affairs. “You don’t get this level of influence at a normal … job in another DOD agency.”

“I’ve seen firsthand how a strong U.S. military force — even one that is not necessarily engaged actively in military operations — bolsters the State Department’s diplomatic leadership,” said Army Lt. Col. Jim Cahill, a military advisor in the Bureau of Population, Refugees and Migration.

Support Conservative Daily News with a small donation via Paypal or credit card that will go towards supporting the news and commentary you've come to appreciate.
Katie LangeMarch 13, 2019
1
Facebook Twitter Reddit Telegram Share via Email Print