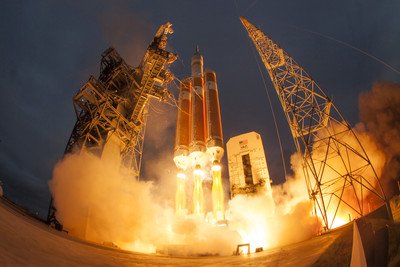 The establishment of the U.S. Space Force will help ensure the United States is postured to deter aggression and outpace potential adversaries in order to protect and defend our national interests in the face of a changing space environment and growing threats.

The Defense Department has forwarded to Congress a proposal to create the U.S. Space Force — the sixth branch of the armed forces, officials at the Pentagon said today.

Space is a vital national interest, and the Defense Department seeks to maintain America’s comparative advantage in this new domain of great power competition, officials said. To that end, they explained, DOD has proposed that the U.S. Space Force initially be established as a new military service within the Department of the Air Force.

Many nations have advanced their space capabilities and are actively looking for ways to deny America’s access to this critical domain. China and Russia have developed anti-satellite capabilities, and other nations — such as North Korea and Iran — are developing assets designed to negate American advantages.

“It is imperative that the United States adapt its national security organizations, policies, doctrine and capabilities to deter aggression and protect our interests,” President Donald J. Trump said in a directive he signed Feb. 19.

If Congress passes the proposal, the U.S. Space Force would be authorized to organize, train, and equip military and civilian personnel “to ensure unfettered access to and freedom to operate in space and to provide vital capabilities to joint and coalition forces in peacetime and across the spectrum of conflict,” the proposal says.

The proposal indicates that stand-up of the U.S. Space Force would be phased over five years – fiscal year 2020 to fiscal year 2024. During this period, the preponderance of space missions, capabilities, and associated personnel residing in the existing military services, including the Air Force, would transfer into the U.S. Space Force, under the direction and final approval of the secretary of defense.

Full Text of the DoD Proposal

Support Conservative Daily News with a small donation via Paypal or credit card that will go towards supporting the news and commentary you've come to appreciate.
Tags
the Department of Defense the U.S. Space Force
Press OperationsMarch 1, 2019
1
Facebook Twitter Reddit Telegram Share via Email Print