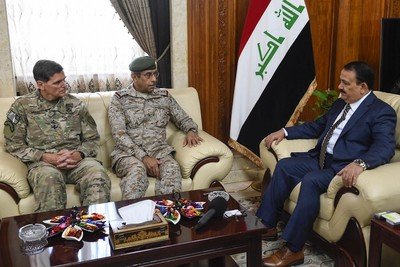 U.S. Central Command is one of the busiest combatant commands in the U.S. military. It is also one of the newer ones.

Centcom really is a result of the hostage crisis in Iran. In 1979, Iranian militants overthrew the Shah of Iran and installed a theocracy. In November of that year, militants stormed the U.S. Embassy and took 52 American diplomats hostage.

The Iranians held the hostages for 444 days. They came back to the United States in the first days after President Ronald Reagan took office. The JTF could have been dissolved, but the action in the Middle East did not stop, and Reagan created Centcom — a full-fledged combatant command — in January 1983.

The command has been busy. Its area of operations runs from the Pakistani border with India to Egypt’s border with Libya. In the 1980s, the command faced operations in Lebanon, the Iran-Iraq War and the mining of the Persian Gulf.

The 1990s began with a bang, as Iraq occupied Kuwait, and the United States put together a coalition to drive Iraq from that country. In January 1991, the Centcom-led coalition attacked and liberated Kuwait.

Through the rest of the decade, the command contained Iraq and worked with allies and partners in the region to minimize Iranian adventurism and tracked the growth of extremist group. On Sept. 11, 2001, al-Qaida — one of those extremist groups — launched attacks in the United States that killed 3,000 people in New York, at the Pentagon and aboard a passenger jet that crashed into a field in Pennsylvania.

U.S. Central Command led the fight against the group in Afghanistan and managed the war against Iraq’s Saddam Hussein beginning in 2003. The command has led the longest fight in American history.

In 2015, the Islamic State of Iraq and Syria took advantage of the Syrian civil war and disorganization in the Iraqi military and took large swaths of both countries. Centcom had a new foe to fight, and the command did so through advising local forces.

The new commander of U.S. Central Command — Marine Corps Gen. Kenneth F. McKenzie — must continue operations in Afghanistan, Iraq and Syria. He must work with Saudi Arabia and the other countries of the Gulf Cooperation Council to contain Iran and ensure tranquility on the Arabian peninsula and the Persian Gulf. He must help share intelligence around the region and ensure all allies and partners are working together to contain ISIS. All this must happen at once to contain a potentially unstable part of the world.

Support Conservative Daily News with a small donation via Paypal or credit card that will go towards supporting the news and commentary you've come to appreciate.
Jim GaramoneMarch 28, 2019
Facebook Twitter Reddit Telegram Share via Email Print