While the mean spirited, America hating socialist/communist Dems and their willing accomplices in the compliant destroy Trump media drug out Michael Cohen to undermine Trump and pave the way for impeachment, he was in Hanoi meeting with Kim Jung Un hopefully to make a deal to denuclearize North Korea and making the world a safer place. President Trump is currently making history in Vietnam by denuclearizing the North Korean Peninsula. This is an act worthy of the Nobel Peace Prize… But the only thing the Fake News Media will cover is the conveniently-timed circus show surrounding Michael Cohen.

For those with short memories, you may recall that last year Kim was firing rockets over Japan and Guam and threatening us. Trump responded by saying if Kim tried anything he would be met with fire and fury as the world has never seen. Kim called his bluff so Trump sent three aircraft carriers with150 planes and two nuclear submarines off the Korean coast and Kim gave in. They then arranged a meeting and Trump put sanctions on North Korea in the hopes they would denuclearize. This was known as peace through strength and always works.

They arranged to meet again this week but failed to make a deal. The nuclear summit between President Donald Trump and North Korea’s Kim Jong Un collapsed Thursday after the two sides failed to reach a deal due to a standoff over U.S. sanctions on the reclusive nation, a stunning end to high-stakes meetings meant to disarm a global threat.

Trump, in a news conference after the abrupt end to the talks, said the breakdown occurred over North Korea’s insistence that all punishing sanctions the U.S. had imposed on North Korea be lifted without Pyongyang committing to eliminate its entire nuclear arsenal.

“Sometimes you have to walk,” Trump explained, adding that an agreement was “ready to sign.”

The breakdown came after Trump and Kim had appeared to inch toward normalizing relations between their still technically-warring nations as the American leader tamped down expectations that their talks would yield an agreement by North Korea to take concrete steps toward ending its nuclear program.

In something of a role reversal, Trump deliberately ratcheted down some of the pressure on Pyongyang, abandoning his fiery rhetoric and declaring he wanted the “right deal” over a rushed agreement.

For his part, Kim, when asked whether he was ready to denuclearize, said: “If I’m not willing to do that I won’t be here right now.”

The breakdown denied Trump of a much-needed victory that could have offset some of the growing domestic turmoil back home. But he insisted that relations with Kim remained warm, stressed that progress had been made and said he was still hopeful of eventually reaching a deal to denuclearize North Korea.

“I’d much rather do it right than do it fast,” the president said. “We’re in a position to do something very special.”

The president said he trusted Kim’s promise that he would not resume nuclear and missile testing, but that the current U.S. sanctions would stay in place.

Describing talks, which ran from a Wednesday dinner through mid-day Thursday, Trump said: ‘We spent pretty much all day with Kim Jong-un, who is – he’s quite a guy and quite a character. And I think our relationship is very strong.’

Both Trump and Pompeo said there was a willingness on both sides to keep talking, but revealed that no follow-up summit has been scheduled.

Trump said that in the meantime, Kim was ‘not going to do testing of rockets and nuclear. I trust him and I take him at his word.’

Trump is right. Sometimes you have to walk away just like Reagan did with Gorbachev in Reykjavik, Iceland. Gorbachev wanted Reagan to remove SDI (Strategic Defense Initiative which was a satellite that when launched would strike down any incoming missiles before they got here). Reagan would not and later the Soviet Union fell because we outspent them and had SDI ready to launch. So Kim may come around in the future after he thinks about it. He was offered prosperity for his people if he denuked, but he refused. He has a lot to think about because in his country they have ways of offing their leaders if they do something they don’t like.  We will keep watch over him so maybe he will reconsider. Only time will tell, but in the meantime, there are no new rockets being launched and Kim knows Trump is tough and means business. 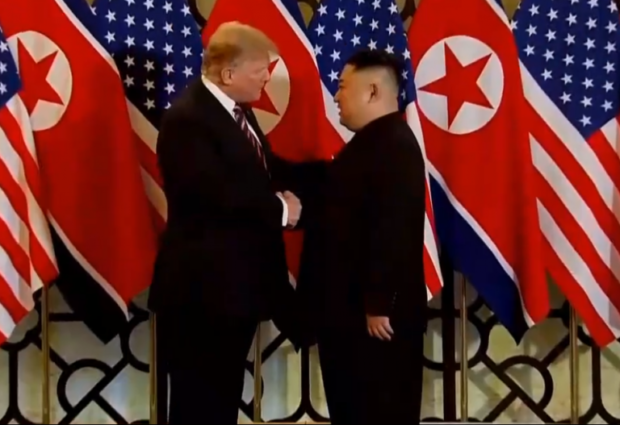