Virginia Democrats, as well as National Democrats, face a difficult question after the precedent they set with the Kavanaugh hearings, Virginia Lieutenant Governor Justin Fairfax (D) has been accused of sexual assault by a fellow Democrat, and Stanford University fellow Vanessa Tyson.

After the racist blackface photos of Governor Ralph Northam were exposed, Dr. Tyson shared the allegation in a private Facebook post she allowed to be shared by others. This comes over a year after she tried to tell the Washington Post of the allegation.

Lieutenant Governor Justin Fairfax knew about the allegations Monday, and when he spoke to advisors he said: “F*ck this B*tch” words far beyond Justice Kavanaugh defending himself against sexual assault allegations which many have been proven to be lies. The Democratic Party called for Justice Kavanaugh not to be confirmed over temperament because he defended himself and he said also he didn’t have any ill will towards Dr. Ford, and that his daughters prayed for her.

The reports in question came from the left-leaning outlet NBC News not any outlet even remotely even in the Center ground of politics. 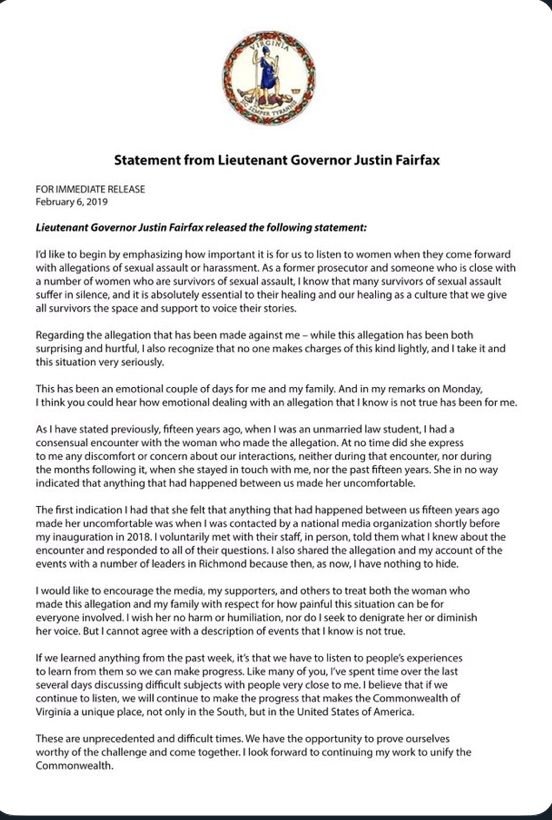 Fairfax released a statement about the abuse allegations he used it to attack Dr. Tyson and her credibility.

Saul Alinsky put it best “Make the enemy live up to its own book of rules.” Fairfax is innocent till proven guilty, however if Kavanaugh defending himself against sexual assault allegations many of which now have been admittedly fabricated, if that’s proof Kavanaugh doesn’t have the temperament to be a Supreme Court Justice, then Justin “F*ck this B*tch” Fairfax surely doesn’t have the temperament to hold public office either.