NBC News associate producer Marianna Sotomayor claimed that the 2020 cycle is the first time that more than one female politician has run for president. 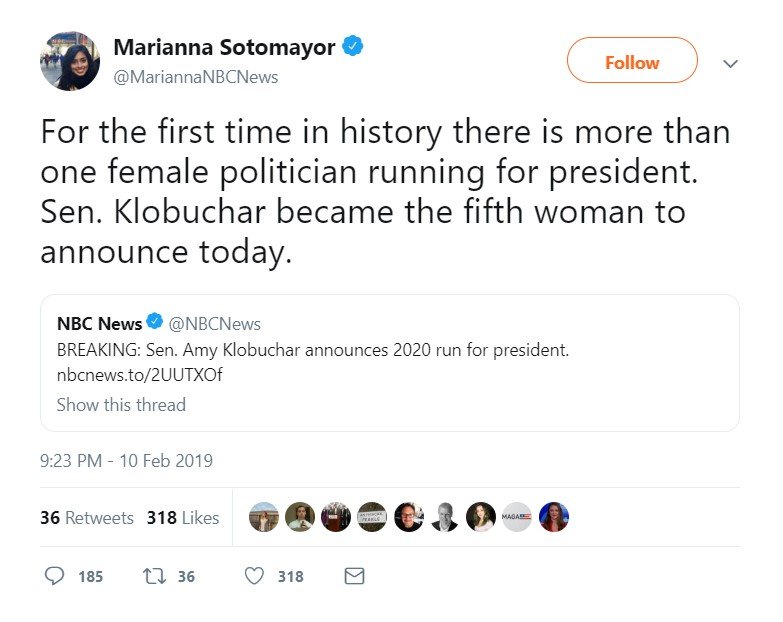 “For the first time in history there is more than one female politician running for president. Sen. Klobuchar became the fifth woman to announce today,” she said in a tweet Sunday night.

A large number of serious, well-known presidential candidates in the 2020 cycle are women. Democratic Sens. Kamala Harris, Elizabeth Warren, Kirsten Gillibrand and Amy Klobuchar, as well as Democratic Rep. Tulsi Gabbard have announced their candidacies. Author and activist Marianne Williamson has also thrown her name into the ring.

The 2020 cycle is the first time that more than two female candidates have competed in the same major party’s primary process, according to the Center for American Women and Politics. This is not the first election cycle, however, with more than one woman seeking the presidency.

In 2016, businesswoman Carly Fiorina ran in the Republican presidential primaries, Jill Stein was the Green Party presidential nominee and former Secretary of State Hillary Clinton was the Democratic Party nominee.

Correcting an earlier tweet. What I should have written is that the field of Democratic women presidential candidates is the largest in history. pic.twitter.com/QgFPAzcFP8

“What I should have written is that the field of Democratic women presidential candidates is the largest in history,” Sotomayor said.

Federal Election Commission records show that many obscure candidates, some of whom are women, also run for president each election cycle.

Elaine Whigham Williams, for example, promised in a 2015 Facebook post to “reverse economic stagnation and economic inequality.” Gayle Jones-Taylor of California voiced her concern about class warfare in a 2015 email to The Atlantic. “These Americans have Middle & Upper Class Citizens & Senators reaching down there LOWER CLASS Citizens throats and taking Foodstamps away from them, in fear of them buying crab legs,” she said.