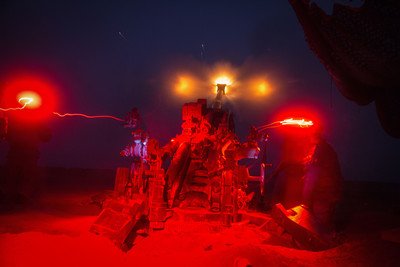 The 2018 National Defense Strategy spells out how the United States will defend the nation and U.S. and coalition forces abroad. West said there are two components to the strategy, the first of which is the “great power competition,” meaning near-peer military competitors China and Russia. The second component of the NDS is a continuation of counterterrorism efforts around the world.

It’s nearly impossible to do both of these two missions alone. As such, West said “there is an increased focus on the importance of partnerships in this approach that will pay dividends as we refine our approach to irregular warfare in this competitive environment.” Irregular warfare, sometimes known as asymmetric warfare, characterizes counterterrorism efforts.

West cited Operation Inherent Resolve, the fight against the Islamic State of Iraq and Syria, as an example of a successful coalition partnership. “Our coalition has liberated the vast majority of ISIS’ so-called physical caliphate,” he said.

In this fight against ISIS, West said the coalition was composed of “U.S. special operations forces partnering with and mentoring the Syrian Democratic Forces, which grew from a few hundred to tens of thousands of Kurds and Arabs, all supported by the U.S. Marines, Army, Air Force and international partners.”

Hecker said that in addition to partnerships at the coalition level, the U.S. must partner with counterpart government agencies to “increase nonmilitary and nonkinetic effects and [enhance] local partner capacity and capability.” For instance, he said, the State Department is involved in diplomacy and other government agencies partner with coalition counterpart agencies to enhance the security environment.

Partners are shouldering more of the load, Hecker said, allowing U.S. forces to have a “smaller footprint” in world trouble spots. For instance, French forces in Mali and Niger have taken the lead in operations against terror groups in those nations. In turn, the U.S. provides them valuable intelligence and logistics.

Support Conservative Daily News with a small donation via Paypal or credit card that will go towards supporting the news and commentary you've come to appreciate.
David VergunFebruary 6, 2019
Facebook Twitter Reddit Telegram Share via Email Print