Posted by: Grace Carr in In The News, US News February 20, 2019 Comments Off on Coast Guard Lieutenant Allegedly Planned To Slaughter Politicians And Journalists

Federal authorities arrested a U.S. Coast Guard lieutenant after finding a trove of guns and ammunition stockpiled at his home in Maryland along with alleged plans to commit a large-scale terrorist attack targeting politicians and journalists.

Federal authorities recovered 15 firearms, a number of which were rifles and long guns, as well as over 1,000 rounds of ammunition in Christopher Paul Hasson’s basement in Silver Spring, Maryland, The Washington Post reported Wednesday. 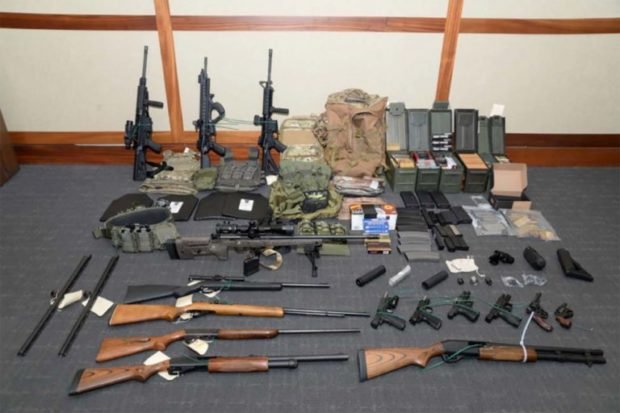 “The defendant is a domestic terrorist,” read court documents with statements from federal authorities. Hasson allegedly intended to execute “acts dangerous to human life that are intended to affect governmental conduct,” the documents say.

The lieutenant allegedly sought to “establish a white homeland” and thought of ways to “kill almost every last person on earth,” according to court records filed in a U.S. District Court in Maryland. Hasson reportedly considered carrying out bombings, sniper attacks, targeting food supplies and carrying out attacks using biological weapons, according to court documents referring to a June 2017 email draft from Hasson.

He allegedly created a Jan. 19 spreadsheet listing political “traitors” and targets. “Please send me your violence that I may unleash it onto their heads,” Hasson wrote in an email draft, according to the Post. “Guide my hate to make a lasting impression on this world.”

“I was and am a man of action … you can make change with a little focused violence,” Hasson also wrote in a letter.

It is not clear what prompted authorities to begin investigating the lieutenant.

Authorities recovered mass stores of human growth hormone in Hasson’s home, mimicking Breivik’s theory that taking steroids and performance enhancers prior to his attack would heighten his ability to kill as many people as possible. Hasson had ordered synthetic urine and over 4,200 pills of Tramadol, a powerful narcotic, since 2016, according to court documents.

Prior to his arrest, Hasson worked at U.S. Coast Guard headquarters in Washington, D.C. He does not work there anymore, according to a Wednesday statement from a Coast Guard spokesman, Lt. Cmdr. Scott McBride.

Hasson served in the U.S. Marine Corps and Army National Guard before beginning work for the Coast Guard in 2016.

The lieutenant’s detention hearing is scheduled for Thursday afternoon. He will be represented by the Office of the Federal Public Defender, the Post reported.