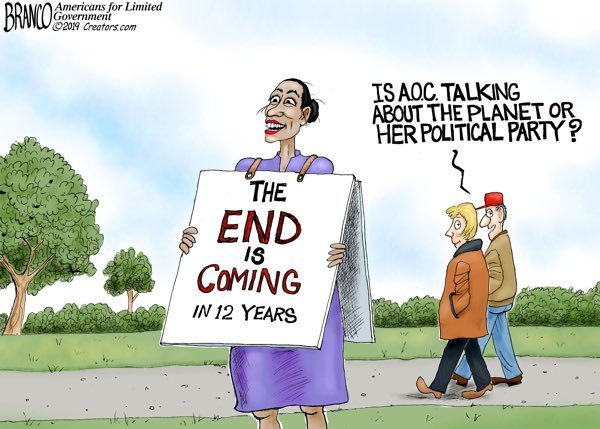 Alexandria Ocasio-Cortez, AOC, is so young that she is unaware of the decades of environmental leftists who have previously predicted global warming doom within 5 years, or 10 years, or 15 years, and her ignorance of things that have come before the present day is making her look like a fool with her new 12-years-to-destruction prediction. But at least her time frame is unique, although still ridiculous.

Beginning in the 1970s we have listened to a series of leftists who were unable to get their act together and give us an idea of what they were really predicting, starting with a new ice age dooming the earth, then they switched to a series of predictions of global warming, then climate change, and all of these new and improved predictions differing greatly on when their total destruction would occur and the devastation they would cause.

Carl Sagan, Paul Ehrlich, Ted Danson, Al Gore, Prince Charles, dozens of Hollywood people who have played scientists in movies, and various Democrat politicians who are salivating at the chance to raise the taxes of all Americans and use our economy to take a severe hit, have made their own predictions. These anti-capitalist and anti-American attempts to impose Socialism on the wealthiest nation in the world are similar to the recent violent events in France, with President Marcon’s misguided plans to increase taxes on gasoline in order to stop the lie of Global Warming. These planned tax increases caused the Les Gilets Jaunes riots that continue to this day in France. Leaders intent on dictatorial powers and command-economy dreams always impose strict rules and higher taxes on the plain working people of their nations, and dream fondly of where they will waste all of this new tax money once it is forced, at risk of imprisonment, from the earnings of their citizens.

All of the ridiculous prophecies of leftists about enormous warming caused by simply driving our family automobiles have been proven wrong, and all of the previous threats of doom in 5 or 15 years have all come and gone with no dire climactic developments that have doomed the world. Leftists have never thought once that, even if a climactic warming increase is approaching, a slowly rising temperature will allow farmers around the world to grow more food for the increasing number of hungry mouths being born into the world each year. A slow increase in temperature is all that has ever been predicted by environmental scientists, with a small increase in temperature being felt in 50 or 60 years, until political scalawags like Alexandria Ocasio-Cortez began pitching her bull-crap of imminent disaster. Someone should tell the good lady that we adults have heard all of this ridiculous hyperbole before and we will not fall into line and have the likes of this leftist fool lead us to national disaster with her little 12-year warning.

The lovely and youthful MS. Cortez is so inexperienced and so stupid in her pronouncements that everyone will eventually recognize her intellectual shortcomings as she continues to spew “progressive“ jargon, and her meteoric rise in the Democrat party will burn out, at which time she’ll fizzle as her ideas are buried in the trash-heap of history, along with the Socialist government of Venezuela. One fears that Ms. Cortez, and her co-conspirator, Elizabeth Warren, will cause the formation of an American Les Gilets Rouge as United States citizens tire of our Socialistic, wealthy home-grown leftists trying to deny us our constitutional rights to freely seek our own happiness and prosperity and to be left alone by our ever-more-intrusive, bloated, government.

Support Conservative Daily News with a small donation via Paypal or credit card that will go towards supporting the news and commentary you've come to appreciate.
Tags
Alexandria Ocasio-Cortez climate change