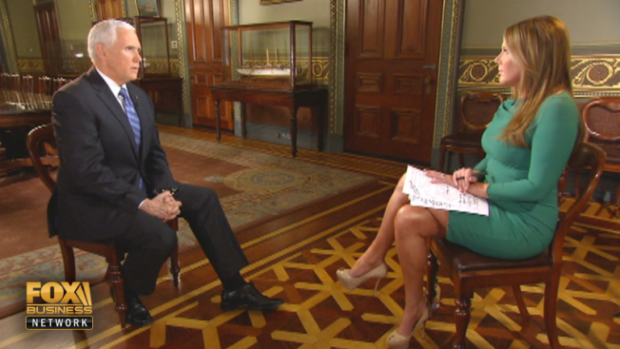 In an interview with FBN’s Trish Regan tonight at 8PM/ET, Pence discusses Venezuela, the government shutdown and the dust-up over the State of the Union address.

Earlier today, the State Department announced that the U.S. government is backing opposition leader and President of the National Assembly Juan Guaido as the interim president of Venezuela. Dictator Nicolas Maduro responded by expelling all U.S. diplomats.

“Today, freedom broke out in Venezuela with the recognition of a new interim president in Juan Guaido,” Pence says in the interview. “A courageous man who stepped forward, the President of the National Assembly, who took the oath of office. I couldn’t be more proud that with President Trump’s direction that America became the first country in the world to recognize President Guaido and now many other nations join us as well.”

With Maduro cutting off diplomatic ties to the United States and declaring Guaido’s constitutional ascendance to the presidency a coup, Venezuela’s future is anything but certain.

“We hope that Nicolas Maduro will accept peaceful transition of power in Venezuela,” Pence told Trish. “That he will accept the will of the people to move his country forward and embrace their new president of Juan Guaido. Look the people, the people as President Trump said today, the people of Venezuela have suffered enough.”

Pence also voiced frustration with the childish manner in which Nancy Pelosi is handling the government shutdown.

“I have to say that for Speaker Pelosi to reject his proposal before he gave his speech should tell the American people everything they need to know about the posture that the Democrats have taken in Washington,” he said. “The American people deserve better, 800,000 federal employees deserve better. We need to secure our border, we need to come together, we can deal with some of these other issues as well and make a step towards reforming a broken immigration system … the time has come for the Democrats to come to the table.”

On Wednesday, President Trump informed Speaker Pelosi that he intended to honor her invitation to deliver the State of the Union Address on January 29th from the House of Representatives. Moments later, Pelosi rescinded her invitation basically canceling the address. While President Trump certainly has a “plan B” up his sleeve (rally anyone?), Pence voiced what most Americans are feeling as they watch the games Democrats are playing.

“I understand the Speaker has indicated that she will not accommodate the President’s opportunity to address the nation and um, I think the American people are just tired of all the posturing by the Democrats in Washington DC.”