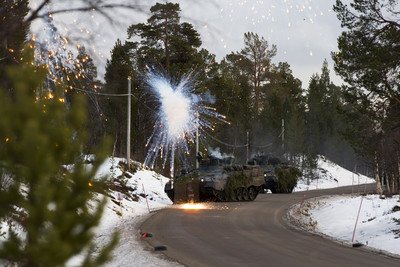 Officials throughout NATO are assessing the lessons learned from the massive Trident Juncture exercise last year, and U.S. European Command officials vow to apply those lessons to exercises moving forward.

Air Force Maj. Gen. John P. Healy, the command’s director of exercises and assessments, praised the soldiers, Marines, airmen, sailors and civilian employees who participated in NATO’s Trident Juncture in Norway last year. “They did the heavy work,” he said.

Trident Juncture is a monumental exercise with thousands of moving parts — from Marines drawing equipment from war stocks and a carrier battle group operating north of the Arctic Circle to airmen bringing in equipment and supplies and engineers examining roads and bridges.

NATO designed the exercise to test interoperability of alliance and partner troops. It examined command and control aspects of alliance forces, and examined the logistics behind the effort, Healy said.

“The unique attribute of the U.S. with our partners and allies is we are the only ones who can actually move stuff to this effect, with this degree of efficiency and effectiveness anywhere in the world at a moment’s notice,” the general said in an interview from U.S. European Command headquarters in Stuttgart, Germany.

But interoperability is more than just solving logistical problems, Healy said. It means forces can work together in a battlespace. “With 31 different nations participating in the exercise, we’ve got 31 different methodologies on how they want to command and control the troops they are bringing along with them,” the general said.

Now the job for U.S. European Command will be to internalize the lessons of Trident Juncture. “We are going to take the lessons and use them in all the NATO exercises, our EUCOM exercises as well as our combined exercises,” he said.

Working with other countries is important to American goals in Europe. “We are one of the partners and allies associated with NATO,” Healy said. “We need to make sure that what we are doing is in line with what NATO’s expectation of a collective defense is and vice versa.”

Support Conservative Daily News with a small donation via Paypal or credit card that will go towards supporting the news and commentary you've come to appreciate.
Jim GaramoneJanuary 17, 2019
Facebook Twitter Reddit Telegram Share via Email Print