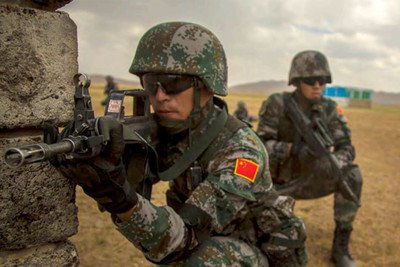 Anyone who doubts whether the world is once again immersed in great power competition should read the 2019 China Military Power Report released today by the Defense Intelligence Agency.

The 140-page booklet explains China’s strategy and its efforts to supplant the United States and impose its rules on the international order.

In a preface to the report, Army Lt. Gen. Robert P. Ashley, the DIA director, said that as China grows in strength and confidence, it will insist on “having a greater voice in global interactions, which at times may be antithetical to U.S. interests.”

It’s modeled after the Reagan era’s Soviet Military Power series, and it uses the words of Chinese leaders and publications to make its case. It also details Chinese strategy and the history behind it.

The report looks at China’s goals, detailing changes in the structures and commands in the People’s Liberation Army. It also looks at military modernization and the underlying goals of Chinese leaders. It serves as a primer for what the U.S. military must counter and where American money would best be spent.

“With a deeper understanding of the military might behind Chinese economic and diplomatic efforts,” Ashley continued, “we can provide our own national political, economic, and military leaders the widest range of options for choosing when to counter, when to encourage, and when to join with China in actions around the world.”

China refers to its military strategy as “active defense” which uses offensive actions if the government believes that an enemy may do something against the interests of China, even if the adversary takes no offensive action.

China characterizes its military strategy as one of “active defense,” a concept it describes as strategically defensive but operationally offensive. The strategy is rooted in the concept that once Beijing has determined that an adversary has damaged or intends to damage China’s interests at the strategic level, Beijing will be justified in responding “defensively” at the operational or tactical level, even if the adversary has not yet conducted offensive military operations.

Believing this modernization is needed for the country to achieve great power status, Chinese leaders are investing in capabilities across all domains of warfare. What it does with this new-found power is what concerns U.S. and allied leaders. China could impose its will in the region in Asia and around the globe.

In his work report to the 19th Party Congress in October 2017, Xi Jinping called on the PLA to “prepare for military struggle in all strategic directions,” and said the military was integral
to achieving China’s national rejuvenation. In his speech, Xi set three developmental benchmarks for the PLA, including becoming a mechanized force with increased informatized and
strategic capabilities by 2020, a fully modernized force by 2035, and a worldwide first-class military by midcentury. The latter two goals build on the call in China’s 2013 defense white
paper, also issued under Xi, for China’s armed forces to achieve a status “commensurate with China’s international standing.” Viewed in sum, Xi’s vision for the PLA constitutes a
logical outgrowth of CCP instructions to the PLA since 2004 to protect China’s expanding “development interests” at home and abroad.

China’s threat matrix is not limited to global powers. In fact, its own internal reports list small local countries as primary threats:

Beijing’s primary threat perceptions include sovereignty and domestic security issues that it believes could undermine the overriding strategic objective to perpetuate communist rule. These include longstanding concerns regarding Taiwan independence, Uighur and Tibetan separatism, and perceived challenges to China’s control of disputed areas in the East and South China Seas. 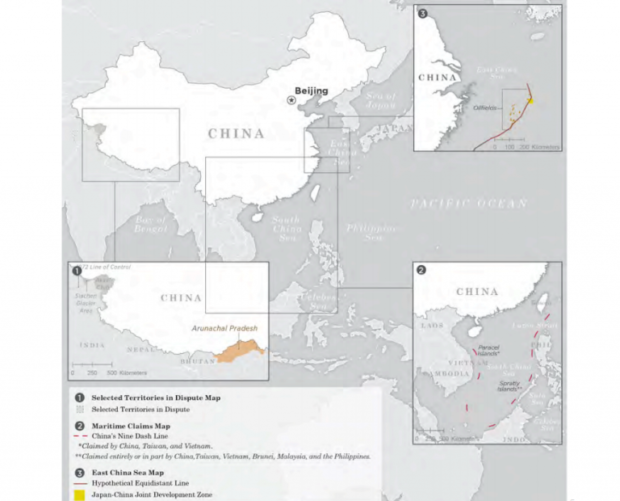 China has concluded negotiations for most of its land borders (India and Bhutan being the outliers) but remains in contention with Japan, the Philippines, Brunei, Indonesia, Malaysia,
and Vietnam over maritime borders, which may in part explain motivation for the PLA Navy’s impressive growth and the new emphasis on maritime law enforcement capabilities.

China began seriously investing in its military in 2000 and increased its spending by 10% per year until 2016 when it slowed to 5-to-7-percent growth. It is estimated that China spent more than $200 Billion on defense in 2018 which is a three-fold increase since 2002.

The Chinese army, the PLA, and navy, the PLAN, are working to enhance their capability to project power globally. Transport aircraft from Russia and the first Chinese aircraft carrier will go a long way to allowing Beijing to move troops, supplies and equipment around the world. China’s carrier performed sea trials in 2018 and is expected to go into service in 2019.

China has a significant space presence including communications and intelligence satellites and now it is investing serious resources into anti-satellite weaponry.

China is developing antisatellite capabilities, including research and possible development of directed-energy weapons and satellite jammers, and probably has made progress on the
antisatellite missile system that it tested in July 2014. China is employing more sophisticated satellite operations and probably is testing dual-use technologies that could be applied
to counterspace missions.

China is investing vast sums of money and tremendous resources into modernizing its army and navy. While still years away from being able deploy a massive conventional force across the globe, it is a regional military superpower with significant conventional, nuclear, and space-based assets.

China will use its capabilities to push disputed borders further out, reunify Taiwan with the mainland and increase its presence in the South China sea and Indian Ocean.

Beijing will also continue its New Silk Road Belt and Road initiative to build ports for less-fortunate countries while indebting those nations to China. This new wave of soft-imperialism will create challenges for NATO, the European Union and the United States.

China is building a robust, lethal force with capabilities spanning the air, maritime, space and information domains which will enable China to impose its will in the region. As it continues to grow in strength and confidence, our nation’s leaders will face a China insistent on having a greater voice in global interactions, which at times may be antithetical to U.S. interests.


Source: Department of Defense – all quotes are from the Defense Intelligence Agency’s 2019 China Military Power Report