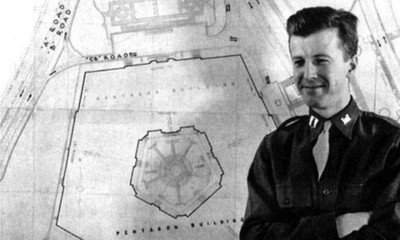 1) Why is the Pentagon, you know, a pentagon?The land the Pentagon was first planned to go on was bordered on five sides by roads, so the architects designed a five-sided building. President Franklin Delano Roosevelt was worried putting the building at that location would interfere with the view of Washington from Arlington Cemetery, so he chose to move it to its present location, but he kept the five-sided design.
2) Sept. 11 has a double significance for the Pentagon.Builders broke ground for the Pentagon on Sept. 11, 1941, exactly 60 years before the Sept. 11, 2001, terrorist attacks.
3) The Pentagon is big. Reallllly big.

It’s the world’s largest low-rise office building. The entire U.S. Capitol building could fit inside any of the building’s five wedges. It has 6,500,000 square feet of office space (three times the floor space in the Empire State Building!), 7,754 windows and 17 1/2 miles of corridors. Yet, its spoke-and-ring design means it takes only about 7 minutes to walk between the furthest two points in the building.

4) The builders were frugal with their materials.During construction, the builders were able to conserve enough steel to build a battleship. And the 689,000 tons of sand and gravel used to make the building’s reinforced concrete – including 41,000 concrete pilings – came from the nearby Potomac River.
5) Until 2011, there was only one passenger elevator in the Pentagon. And it was reserved for the defense secretary.A 17-year-long renovation project that finished in 2011 saw 70 passenger elevators installed in the building. Until then, people who couldn’t use stairs used long ramps to move between floors. The ramps are still there, but the rumors of office chair races are greatly exaggerated.
6) That renovation project? It probably saved thousands of lives.

The Pentagon is divided into five wedges, and the renovation project was going wedge by wedge when terrorists flew American Airlines Flight 77 into the Pentagon, Sept. 11, 2001, killing 189 people. The plane hit in Wedge 3, where renovations had just completed, but only about 800 out of the 4,500 people who normally would have been working there had moved back into their offices. And the new sprinkler system, extra structural support and blast-resistant windows helped to keep the building damage to a minimum, likely saving additional lives.

7) The Pentagon was the first desegregated building in Virginia.The Pentagon was designed when segregation was the law in Virginia. But Roosevelt had signed an executive order the previous year, which forbade discrimination against government workers on the basis of race, creed, color or national origin. So the Pentagon became the only building in Virginia where segregation was not enforced. Because segregation was state law, the Pentagon was built with twice as many bathrooms as needed for a desegregated building of its size.
8) It was constructed in record time.More than 15,000 workers were on site around the clock, and wartime office space shortages meant that workers moved in before the Pentagon was fully finished. Construction finished on Jan. 15, 1943, just 16 months after it started. Speed costs money, though: Initially budgeted at $35 million, the final cost was $63 million, more than $900 million in today’s money.
9) The same guy oversaw construction of the Pentagon and the atomic bomb.

Col. Leslie Groves, an Army Corps of Engineer officer, took charge of the Pentagon’s construction in August 1941. He worked six days a week in his office in Washington. Then on Sundays, he would visit the project he felt most needed his personal attention. Groves later said of his time at the Pentagon that he was “hoping to get to a war theater so I could find a little peace.” Instead, he was assigned to direct the Manhattan Project – America’s effort to build an atomic bomb.

10) For a while, there was a secret crash pad in the Pentagon.Grove was widely known as a tough boss. One of his deputies, Army Maj. Robert Furman, had to be at the Pentagon at all hours of the day and night. Sometimes he’d go days without going home at all. In order to get some sleep, Furman had the Pentagon contractors build a secret apartment between the walls of what would become the Army’s Ordnance Division. He and some of Grove’s other deputies would use the apartment to grab a few z’s, shower and get back to work. Furman continued to use the apartment on official trips back to Washington while he served as an intelligence officer on the Manhattan Project, but was forced to hand over the keys in 1943 when he was discovered by ordnance officers while leaving the apartment.

Support Conservative Daily News with a small donation via Paypal or credit card that will go towards supporting the news and commentary you've come to appreciate.
Tags
The Pentagon
Claudette RouloJanuary 3, 2019
Facebook Twitter Reddit Telegram Share via Email Print