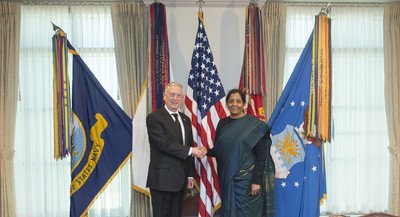 Both said the U.S.-India friendship is getting closer and praised the progress being made. Both nations share “the same principles, values and respect for the rules-based international order,” Mattis said at the beginning of their meeting.

India spent decades as a “non-aligned” state during the Cold War. Since then, there has been a warming of relations between the United States and India. Mattis quoted Indian Prime Minister Nahrendra Modi, saying the two countries “have overcome the hesitations of history, carrying forward a legacy of friendship and making clear there is no contradiction between strategic autonomy and strategic partnership.”

Defense cooperation between the two countries is continually improving, highlighting their shared vision of “a safe, prosperous and free Indo-Pacific, underpinned by respect for the sovereignty and territorial integrity of all nations,” he said.

India has major defense partner status from the United States – a status only shared by very close allies such as the NATO nations. Sitharamen said that was a landmark in relations between the nations and it “was very well received in India.”

“Our bilateral relationship continues to be very strong,” the defense minister said. She added that she anticipates the bonds will grow and allow the two nations to cooperate on a number of regional and global issues.

“Our relations are based on common democratic values, enjoy strong political and popular support in both our countries,” she said. “There is a growing mutual trust and also the confidence in the defense partnership which augers very well for the future.”

When the Indian delegation finishes its visit to Washington, Sitharamen will visit the Defense Innovation Unit in California and U.S. Indo-Pacific Command in Hawaii before returning to India.