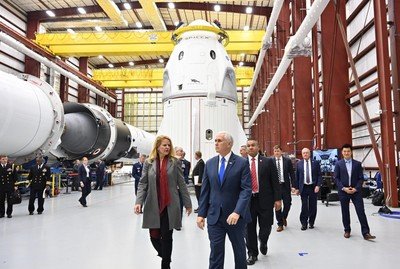 “It will serve alongside other functional commands like Strategic Command and Special Operations Command, and it will be led by a four-star flag officer,” Pence said. “It will establish unified control over all our military space operations.”

U.S. Space Command will integrate space capabilities across all branches of the military, the vice president said. “It will develop the space doctrine, tactics, techniques, and procedures that will enable our warfighters to defend our nation in this new era,” he added.

In the future, the U.S. Space Command will become the sixth branch of the armed forces, he said, noting that the administration is working with Congress to stand up the U.S. Space Force before the end of 2020.

Pence was joined by Air Force Secretary Heather Wilson, who announced the upcoming launch of the Global Positioning System III Space Vehicle 1, the “Vespucci,” a communications satellite designed to deliver GPS to the military.

In the audience were airmen of the 45th Space Wing who were involved in the lead-up to the launch of the “Vespucci.”

“We’ve forged new partnerships with pioneering companies like those involved in the rocket that sits on the launch pad today,” Pence said. “We’re investing in tools and capabilities that our armed forces need to protect our nation from the commanding heights of space. And that, of course, is what the 45th Space Wing has always done. … And we’re going to continue to provide the 45th with the resources to accomplish your mission in the days ahead.

“The progress that we’ve made and the leadership America has provided in space is a result of careful, methodical, cutting-edge work of the people that are gathered here and the decisions that were even made here today,” the vice president said, looking out at the assembled airmen. 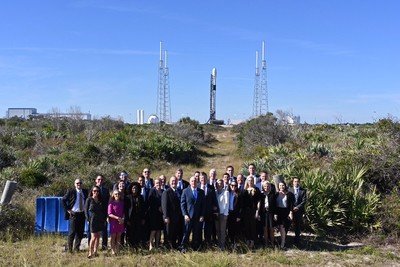 Support Conservative Daily News with a small donation via Paypal or credit card that will go towards supporting the news and commentary you've come to appreciate.
David VergunDecember 19, 2018
Facebook Twitter Reddit Telegram Share via Email Print