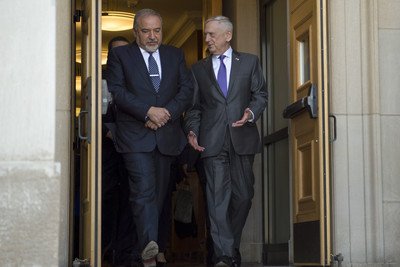 The secretary is scheduled to participate in what he described as a small-group meeting in Ottawa to discuss defeating the Islamic State of Iraq and Syria.

Israel is slowly working inside its border to identify the tunnels and block them. “It would be irresponsible if Israel did not undertake this operation and protection of their own territorial integrity and their own populations,” Mattis said.

Mattis called the action “exactly the right thing to do,” noting that the Israelis are staying on their side of the border. “There is nothing provocative about it,” he added. “Obviously, the problem is whoever dug the tunnels, and they are engaged in basically solving that problem.”

The secretary said he believes the United Nations Interim Force in Lebanon, the U.N. command there, will be in a position to observe the tunnel blocking. “That sort of openness makes very clear what’s going on and why it’s going on in order to maintain safety,” he told reporters.

UNIFIL is a demilitarized zone created by the U.N., with the adoption of Security Council Resolution 425 and 426 on March 19, 1978, to confirm Israel’s withdrawal from Lebanon — which Israel had invaded five days prior — and to restore international peace and security while helping the Lebanese government orestore its effective authority in the area.

A tripartite meeting took place in the last day or two, Mattis noted, in which the U.N., Lebanese and Israelis got together. “Those processes continue,” he said. “I’ve not seen any increased response at this time from Lebanese Hezbollah or Israel. And the Lebanese — I would just point out [that] we have the legitimate state security organization [in] the Lebanese armed forces,” he added. “[We] have a … U.S. military partnership with them, and they are helping to keep the stable situation stable right now. So [it is about] full support for the Israel operation from our view.”

It’s a necessary operation for the protection of innocent people, Mattis emphasized. “It’s on the Israeli side of the border,” he said. “UNIFIL, I’m confident, will be able to observe the operation, and the Lebanese armed forces are certainly doing their part in order to maintain stability in southern Lebanon.”

Source: Department of Defense
Content created by Conservative Daily News is available for re-publication without charge under the Creative Commons license. Visit our syndication page for details and requirements.