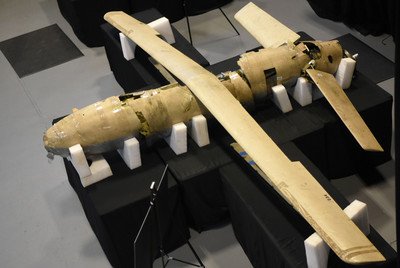 Brian Hook, special representative for Iran and senior policy advisor to the secretary of state, provided evidence of Iran’s violation of U.N. resolutions against weapons proliferation during a news conference at Joint Base Anacostia-Bolling in Washington, D.C.

Iran has the largest ballistic force in the region, Hook said, with 10 ballistic missile systems in its inventory or under development. Missile development and testing has increased in recent years, he added.

Last year, Iran launched a medium-range missile believed to be the Khorramshahr, he said. It can carry a payload of more than a half ton and could be used to carry nuclear warheads. Its suspected range is 1,200 miles, which puts Europe in range.

The U.S. is unveiling new evidence of Iran’s ongoing missile proliferation throughout the region, he said, standing in a hangar near a variety of seized Iranian weapons in a display he said is much larger than it was a year ago.

Those weapons are being exported to proxy rebels in a number of countries including Lebanon, Syria, Iraq, Bahrain and Yemen, he said.

In response, the U.S. is ramping up diplomatic efforts and is strengthening economic sanctions against Iran, he said. The U.S. military also is working to build capacity and capability with militaries in the region.

Support Conservative Daily News with a small donation via Paypal or credit card that will go towards supporting the news and commentary you've come to appreciate.
Tags
Iran the Department of Defense
David VergunDecember 2, 2018
Facebook Twitter Reddit Telegram Share via Email Print