The public got its first look at the future of U.S. Army helicopter technology on Wednesday when Sikorsky, a Lockheed Martin company (NYSE: LMT), and Boeing (NYSE: BA) unveiled the SB>1 DEFIANT helicopter the companies have developed for the U.S. Army’s Joint Multi-Role technology demonstrator program. The SB>1 DEFIANT is designed to fly at twice the speed and range of today’s conventional helicopters and offers advanced agility and maneuverability.

The helicopter is participating in the Army’s Joint Multi-Role-Medium Technology Demonstrator program. Data from SB>1 DEFIANT will help the Army develop requirements for new utility helicopters expected to enter service in the early 2030s.

The two most notable differences between the SB>1 and helicopters currently performing the duties it is designed to perform is it’s dual, counter-rotating main rotors and the replacement of traditional verticle tail rotor with a pusher propeller. Instead of providing rotational stability and steering, the tail rotor now provides forward thrust. 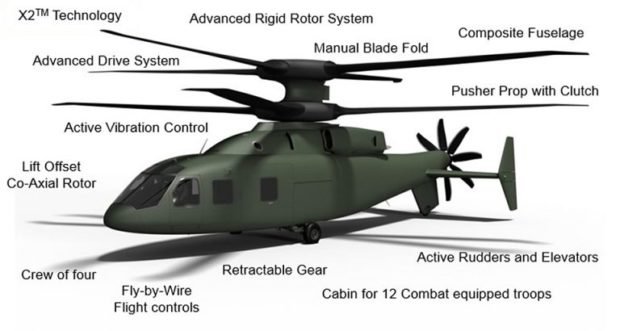 The aircraft’s capabilities are largely derived from the X2 rigid co-axial rotor system which has already proven its airworthiness through flights of the X2 and S-97 Raider. With two coaxial rotors on top that rotate in opposite directions, the extra lift from each rotor’s advancing blade balances out the diminished lift from the opposite side’s retreating blade to eliminate retreating blade stall. To provide the raw forward thrust for fast flight, the back of the SB>1 DEFIANT™ mounts a pusher propulsor, allowing the aircraft to fly twice as fast and twice as far as today’s conventional helicopter while increasing the overall maneuverability and agility required for specific mission objectives. This additional flight component also provides unique and unmatched maneuverability in all flight regimes including hover, low-speed flight and high-speed flight.

Support Conservative Daily News with a small donation via Paypal or credit card that will go towards supporting the news and commentary you've come to appreciate.
Tags
Boeing SB>1 Sikorsky U.S. Army