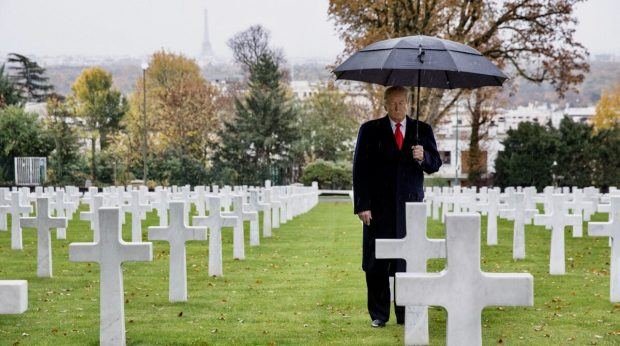 President Donald Trump paid tribute to fallen Americans of World Wars I & II while he attended a luncheon and commemoration ceremony at Suresnes American Cemetary in Suresnes, France, Sunday. 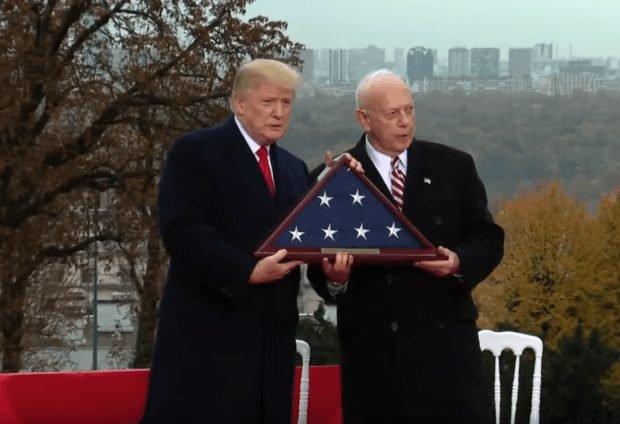 Major General Matz, I want to thank you and everyone at the American Battle Monuments Commission for doing just an absolutely fantastic job.

Exactly 100 years ago today, on November 11th, 1918, World War I came to an end. Thank God. It was a brutal war. Millions of American, French, and Allied troops had fought with the extraordinary skill and valor in one of the bloodiest conflicts in human history.

We are gathered together, at this hallowed resting place, to pay tribute to the brave Americans who gave their last breath in that mighty struggle.

Earlier, Melania and I were deeply honored to be the guests of President Macron and Brigitte at the Centennial Commemoration of Armistice Day. It was very beautiful and so well done.

To all of the French military leaders and dignitaries in attendance with us now: Thank you for joining us as we honor the American and French service members who shed their blood together in a horrible, horrible war, but a war known as the Great War.

Thank you as well to the members of Congress who have joined us: Ralph Abraham, Anthony Brown, John Carter, Paul Cook, Henry Cuellar, Richard Hudson, Bill Huizenga, Dutch Ruppersberger, John Rutherford, and Steve Stivers. Thank you all very much for being with us. Thank you very much. I know you wanted to be here very badly. We appreciate it.

In the United States, Armistice Day is now enshrined as Veterans Day. We have a number of amazing veterans with us today, including six veterans of World War II:

You look like you’re in really good shape, all of you. (Applause.) I hope I look like that someday. You look great. America is forever in debt, and we are forever in your debt. And we really appreciate you being here.

We’re also joined by another very special guest: a 13-year-old boy from the United States named Matthew Haske. Matthew is in the eighth grade, and he worked and saved all of his money for two years to make this trip to France. He wanted to be here in person to honor the American heroes of World War I. Matthew, thank you. You make us very proud. Where is Matthew? Matthew. Matthew. (Applause.) Thank you very much. You’re way ahead of your time, Matthew. Thank you.

On this day, in the year 1918, church bells rang, families embraced, and celebrations, as you know, filled the streets like never before, in towns throughout Europe and the United States.

But victory had come at a terrible cost. Among the Allied Forces, more than one million French soldiers and 116,000 American service members had been killed by the war’s end. Millions more were wounded. Countless would come home bearing the lasting scars of trench warfare and the grisly horrors of chemical weapons.

Here on the revered grounds of Suresnes American Cemetery lie more than 1,500 U.S. service members who made the ultimate sacrifice in the First World War. Among those buried here are legendary Marines who fought in the Battle of Belleau Wood.

It was in that battle that our Marines earned the nickname “Devil Dogs,” arising from the German description of their ferocious fighting spirit. John Kelly knows that name, “Devil Dogs,” very well, John. Right?

Earlier this year, President Macron presented an oak sapling from Belleau Wood as a gift to our nation — an enduring reminder of our friendship sealed in battle. We fought well together. You could not fight better than we fought together. Sergeant Eugene Wear from Hazleton, Pennsylvania was one of the Marines at Belleau Wood. Eugene raced straight into a barrage of enemy fire, like no one has ever seen before, to bandage his friend’s wounds and carry him back to safety.

Months later, Eugene was mortally wounded. He passed away one day after Christmas. His mother would come right here to mourn by the grave of her precious son. She loved him so much. She was one of the thousands of American moms and dads whose beloved children found their final resting place on the hillside of Suresnes.

Each of these marble crosses and Stars of David marks the life of an American warrior — great, great warriors they are — who gave everything for family, country, God, and freedom. Through rain, hail, snow, mud, poisonous gas, bullets and mortar, they held the line, and pushed onward to victory — it was a great, great victory; costly victory but a great victory — never knowing if they would ever again see their families or ever again hold their loved ones.

Here are the words of a young soldier named Sergeant Paul Maynard from a letter he wrote only a few days before the end of the war: “Dear Mother, I think of you all at home, and I know if I am spared to get back, that I shall appreciate home more than ever, [ever] before. It will seem like heaven to me to be once more where there is peace and only peace.”

On November 11th, 1918, Paul died in the final hours of battle, just before the end. No, sadly, he did not make it. He was among the countless young men who never returned home. But through their sacrifice, they ascended to peace in heaven. Rest in peace, Paul.

The American and French patriots of World War I embody the timeless virtues of our two republics: honor and courage; strength and valor; love and loyalty; grace and glory. It is our duty to preserve the civilization they defended and to protect the peace they so nobly gave their lives to secure one century ago.

It is now my great honor to present Major General William Matz with an American flag, as a symbol of our nation’s gratitude to the American Battle Monuments. The Commission has done such an incredible job. And, General, we very much appreciate it. Today, we renew our sacred obligation to memorialize our fallen heroes on the soil where they rest for all of eternity.

Thank you all. God bless you. This has been a wonderful two days we spent in France. And this is certainly the highlight of the trip. Thank you very much. Appreciate it. (Applause.)